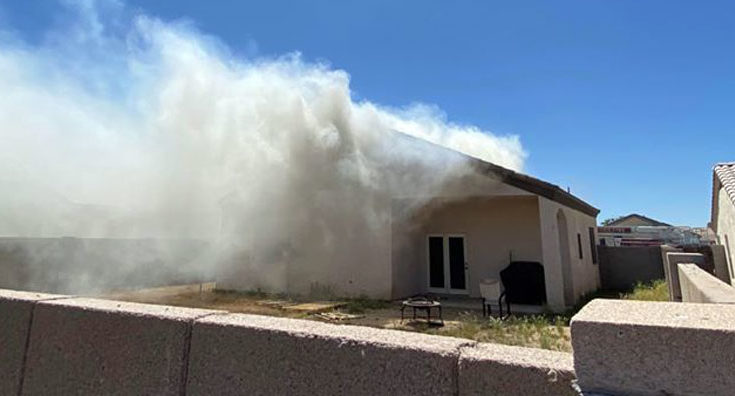 Photo By Nicole Evans Lunt: This residence on Lamonica Way in Safford suffered extensive smoke and water damage after the resident accidentally caught it on fire while burning weeds too close to the structure.

SAFFORD – For the second time this season, a resident burning weeds early Friday afternoon caught their home on fire.

The Safford Fire Department was dispatched at about 1:30 p.m. to a residence on Lamonica Way, which is south of 20th Street and east of 8th Avenue.

Firefighters had to pull down ceiling in the garage and elsewhere and pulled some of the roof’s cement tiles to check for burning and where the roof had burned so the tiles wouldn’t fall on the residents while they were salvaging their property.

The volunteer Safford Fire Department rolled two trucks to the scene and managed to save the residents’ possessions while keeping the fire to the sole structure and, mostly, in the attic area. Still, the residence suffered extensive smoke and water damage, but it can be rebuilt, according to Bingham.

“The guys did a really good job at salvaging the house,” Bingham said. “We’re really efficient at fighting fires like this and they kept it from spreading by having a real aggressive attack and a quick response time.”

“Don’t burn near the house,” Bingham said. “If there’s any question ‘should I burn today or not?’ err on the side of no.”