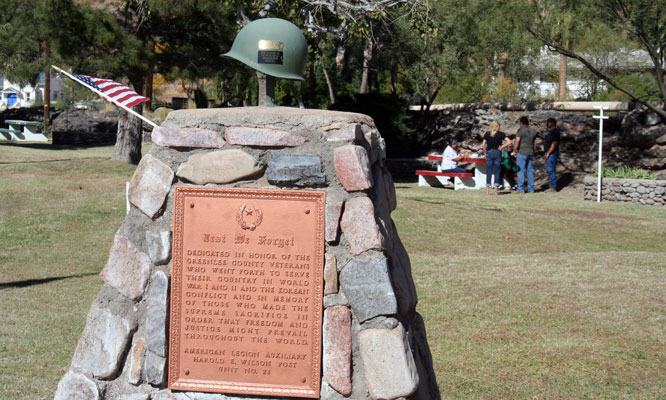 Photo By Walt Mares: This World War II helmet atop a monument in Clifton’s Veterans Park belonged to Emilio Membrila, Clifton, who fought in the infamous Battle of the Bulge during that war. Membrila was captured by the German enemy and spent time in a Prisoner of War camp but eventually made it back home. Note the family in the background enjoying American freedom while having a picnic at the park. A special luncheon for all veterans and immediate families will be held Friday, Nov. 11, at 2 p.m. at the American Legion Hall in Clifton.

They have already personally given much for their country and they are giving again. That is, U.S. military veterans of Clifton-Morenci American Legion Post 28 are holding a Veterans Day luncheon for all veterans and their immediate families.

It will be this Friday, Nov. 11, at 2 p.m., at the Legion Hall in Clifton. It is guaranteed to be special as the Women’s Auxiliary is doing all the cooking and all preparations for the meal.

For those who have never had the pleasure of a meal prepared by the Auxiliary, they are certainly in for a special treat.

Special? “Amen to that,” said Vietnam veteran and Post 28 member Larry Avila. “We’ve never had what you can call ‘a bad meal’ prepared by the Auxiliary. They always work hard at whatever they do, and it shows. Call it quality.”

All veterans are invited, whether or not they were in combat, Avila said. He added that some people think they must be combat veterans to join the Legion, but that is not the case.

He said there are many veterans in Greenlee County and they are welcoming younger vets to join the Legion. Many current members are from the Vietnam Era “and we welcome some new blood, so to speak.”

There are community activities the Legion sponsors, much of which is family oriented. For example, on Christmas 2021 the Legion hosted a Christmas party in which a great many toys were distributed to children from the community.

“The kids really loved it and no doubt parents did too.” said Avila “Of course, having Santa Claus there was a big hit. He had many, many kids on his lap and he looked kind of tired by the time he had to leave and go back to the North Pole. But he went away happy and the kids certainly did.”