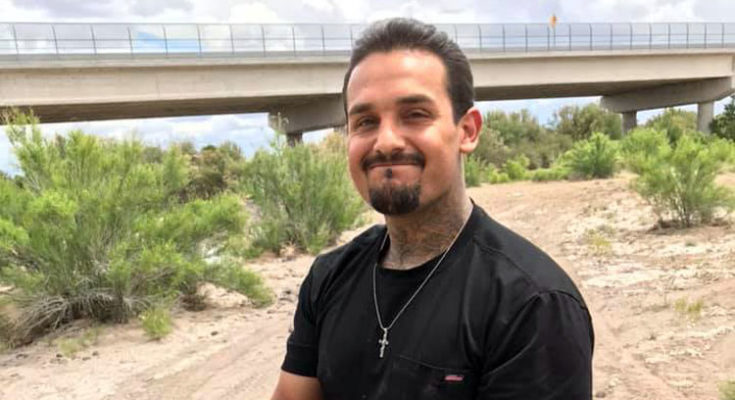 Police issued an ATL for Richie Garcia after he was implicated in two separate aggravated assaults.

SAFFORD – Police were on the lookout for Richie Pablo Garcia, 29, of Safford, after he was implicated in two separate assaults that happened less than an hour between them Sunday, May 5. As of Wednesday, May 8, the police had not yet located Garcia.

According to a Safford Police report, an intoxicated Garcia broke his father’s jaw and finger in an assault after his father reprimanded him for driving his work truck recklessly in the neighborhood.

An officer was dispatched at about 7:06 p.m. to the area of 3rd Street and 7th Avenue and came upon the victim, who had a swollen jaw and finger and dried blood on his lips.

The victim said Garcia was intoxicated and arrived at his residence and began to strike him after the victim had called him on the phone about his erratic driving. The victim did not fight back, according to his statement to police and other occupants had to physically pull Garcia off to stop the assault.

Witnesses at the scene stated Garcia left the area in his Ace Industries, Inc. work truck. Ace Industries specializes in cranes and hoists and is not related to Ace Hardware. An Attempt to Locate was then issued for Garcia.

The victim was evaluated at Mt. Graham Regional Medical Center and was then flown to a Tucson hospital for further treatment.

At about 7:40 p.m., an officer was dispatched to the Court Street Apartments regarding an assault and Garcia was again named as the primary suspect.

According to a Safford Police report, witnesses advised that a white, Dodge extended-cab Ace Industries, Inc. work truck drove into the Court Street Apartments at a high rate of speed. When a man confronted the driver about driving recklessly with children in the area, the driver, later identified as Garcia, allegedly initiated a physical confrontation and took the man to the ground and put him in a chokehold.

The man’s 13-year-old daughter reported she kicked Garcia in his genitals. She said Garcia then took a flashlight from the victim and struck him in his head three times. Afterward, he got back into his truck and left.

The male victim was transported to MGRMC, where it was learned he had suffered a broken cheekbone and broken rib.

Officers located the Ace Industries, Inc. work truck at a residence where Garcia and his girlfriend live but were unable to locate Garcia.

Garcia has had numerous run-ins with law enforcement previously but has avoided police conflict recently and was just released off probation in January.

He previously was sentenced to 4.5 years in prison by then Graham County Superior Court Judge R. Douglas Holt in July 2010 on a litany of charges, including an escape from the old jail.

At that time, Garcia pleaded guilty to theft of a means of transportation – a Class-3 felony, aggravated DUI – a Class-4 felony, unlawful flight from pursuing law enforcement and escape in the second degree – both Class-5 felonies, attempted hindering of prosecution in the first degree – a Class-6 felony, DUI – a Class-1 misdemeanor, and an additional charge of escape in the second degree for when he broke out of the Graham County Jail early in the morning of March 30, 2010. He was sentenced to 2.5 years on the theft of means of transportation charge and a consecutive sentence of two years for his last escape charge. All of his other charges had concurrent sentences.