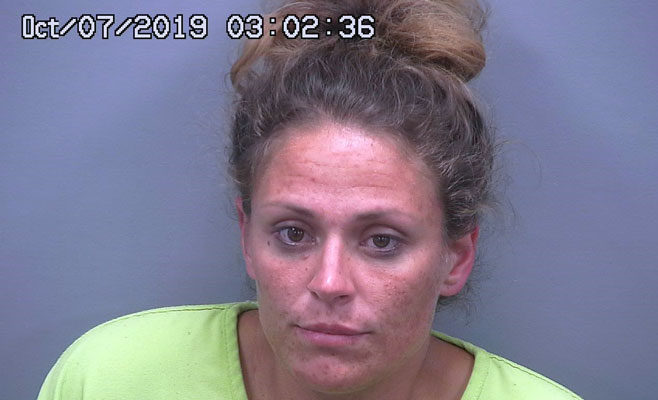 Contributed Photo/Courtesy GCSO: Britannia Lopez, 32, was arrested for aggravated DUI and was booked into the jail on multiple felony warrants.

SAFFORD – Police arrested two people for aggravated DUI on Monday, Oct. 7, in two separate incidents. Both drivers appeared to be driving while under the influence of illegal drugs.

On officer first pulled over a white, GMC Yukon at about 12:13 a.m. as it traveled westbound on Central Avenue after noticing the license plate was expired.

The officer followed the Yukon as it pulled into the Speedway gas station at 750 S. 8th Ave. and parked near the air pump. At that time, the officer informed the driver, identified as Britannia Ruth Lopez, 32, of the reason for the traffic stop. Lopez allegedly told the officer that the vehicle was recently purchased and she hadn’t registered or insured it yet. The officer noted that Lopez appeared to be under the influence of some sort of drug.

The officer then learned that Lopez had active felony warrants for her arrest out of Graham County Superior Court and informed her she was under arrest. Lopez’s 3-year-old son was a passenger in the vehicle along with another woman, and Lopez called her mother to come retrieve her son.

The officer then requested permission to search the vehicle and Lopez denied and said she couldn’t give permission because it wasn’t her vehicle and she had lied earlier.

The vehicle was then impounded for having expired registration and a tow inventory located a broken syringe. When asked when the last time she had used drugs, Lopez allegedly responded that she had used crystal methamphetamine earlier in the day.

After failing a field sobriety test, Lopez was also placed under arrest for aggravated DUI and, after receiving a search warrant from a judge, her blood was taken for testing purposes. She was then transported to the Graham County Adult Detention Center and booked for her warrants. DUI-related charges are pending the results of the blood test and review by prosecutors.

Later that same day, Clayton Scott Harrington, 30, of Duncan, was arrested for aggravated DUI as well.

An officer was on patrol at about 2:51 p.m. when he noticed a black, four-door sedan stop passed the white stop lines at the intersection of U.S. Highway 70 and U.S. Highway 191 (1st Avenue). The officer ran the vehicle’s license plate and learned it did not have a valid registration.

The officer initiated a traffic stop and the car pulled into the Haralson Tire Company parking lot.

The officer noted that both the driver, Harrington, and his passenger were known to have dealings with illegal drugs in the past. Additionally, Harrington’s driver’s license is suspended and he had recently had a default judgement levied against him Sept. 30 after he failed to appear for court.

During the interaction with Harrington, the officer noticed what he believed to be intravenous track marks on Harrington’s arms. When asked Harrington allegedly advised he used heroin two to three days ago and had done so by injecting the drug under his tongue because the veins in his arms are too scarred from previous use.

After failing a field sobriety test, Harrington was placed under arrest for aggravated DUI and was transported back to the Safford Police Department, where he consented to a blood draw.

Harrington then said he wasn’t feeling so well, so he was transported to the Mt. Graham Regional Medical Center and was released.