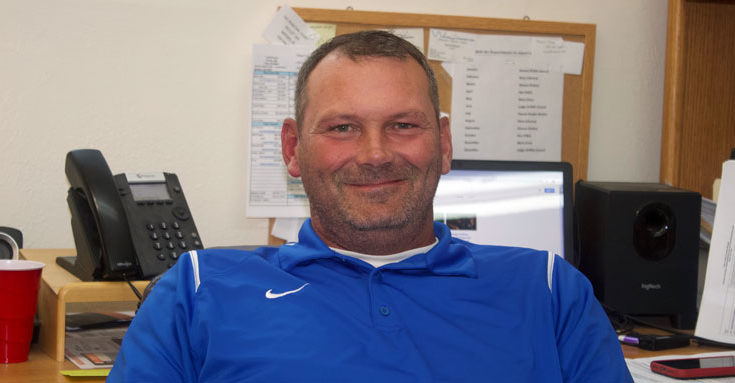 “Sean is, to me, is probably the best town manager that we’ve ever had.”

PIMA – Despite some actions to the contrary, Pima Town Manager Sean Lewis doesn’t appear to be leaving his position anytime soon.

After nearly four years on the job, Lewis reportedly submitted his resignation as Pima Town Manager recently and posted his job on the Arizona League of Cities and Towns website. However, Lewis isn’t poised to go anywhere just yet.

While Lewis is currently on vacation, he replied to a text from the Gila Herald and advised he intends on remaining in his position.

According to Pima Mayor C.B. Fletcher, Lewis’ stated resignation was in reaction to flak he received from a council member over an issue that came up during a town audit regarding missing credit card receipts or missing information on some receipts that were submitted. Fletcher advised that the issue should be fully cleared up on Tuesday.

Fletcher spoke very highly of Lewis and said while he could easily go elsewhere and get employment that pays more and has already been headhunted locally, he chooses to stay in Pima.

“He’s such a great manager,” Fletcher said. “He loves Pima. He wants to live here, and when he first came to work as the manager he said, ‘you know, I want to spend 20 years here and then retire. This is where I want to spend the rest of my life.’ If you can get a manager to do that and he is capable and does the job; wow, what more can you ask for?”

Lewis began his tenure at Pima in 2004 as a heavy equipment operator in the Public Works division and was soon trained and certified on dealing with the swimming pool and the town’s sewer system.

During his nine-year stay in Public Works, he also became the Planning and Zoning administrator.

Lewis took a sojourn to be a heavy equipment operator for Freeport McMoRan Inc. for four years, but returned to the town in late 2016 as the Planning and Zoning administrator and then back into Public Works, handling the sewer, the pool, highways, streets, parks, and more.

When the position of town manager opened, Lewis was placed as the interim manager and after a search was selected to officially become the town manager on July 1, 2017, and recently earned a degree from Arizona State University in government management, according to Fletcher.

Lewis cleaned up the mess left behind from Pima’s previous town manager and was influential in discovering that the town clerk at the time, Barbara Herreras, had embezzled nearly $60,000 from the town’s sewer fund.

Herreras pleaded guilty March 31, 2020, to reduced charges of attempted theft – a Class-3 felony, and forgery – a Class-4 felony, and was sentenced April 22, 2020, to 2.5 years in prison to be followed up by 5 years on probation. Herreras also stipulated to a restitution order of $59,250. She was required to pay the first $17,000 in restitution to the town of Pima and the final $42,250 to its insurance company. The town previously was paid $59,250 by its insurance company and the additional $17,000 is to cover the amount the town said Herreras stole the previous fiscal year before the main theft in the fiscal year 2017/18.

According to police reports from the Pima Police Department and Graham County Sheriff’s Office, accountants first brought the $17,000 discrepancy to then Pima Town Manager Jeff McCormick after an audit of the fiscal year 2016/17 but McCormick chalked it up to Herreras not knowing how to enter the amounts into the bookkeeping software correctly. McCormick later resigned from his position amidst financial questionings from the Pima Town Council in lieu of being terminated in May 2017.

Lewis stepped into that situation and cleaned up the office and its books. The latest audit inquiry is expected to be corrected to auditors’ satisfaction shortly.

As Pima Town Manager, Lewis has spearheaded numerous programs for the betterment of the community, including a cleanup program that resulted in the removal of more than 27 dilapidated trailers and picking up bulk trash for community members during Community Pride Days.

Lewis, working along with members of the Pima Town Council, also spearheaded quarterly events for the community, which included holiday programs, special events, and activities for the residents’ benefit.

During his tenure as town manager, Lewis has been the driving force on a resurgence of economic development for Pima.

The building of the Optimal Health Centre building – which basically involved a land swap, cleaning up the old Graco car lot, and utilizing a $375,000 zero-interest rate loan – is the biggest and most obvious addition.

Lewis has also worked with the Graham County Electric Cooperative on a solar parking shade project in front of the swimming pool that lowered the pool’s utility costs. The amount of solar constructed completely runs the pool during the middle of the day and also initially had no cost to the town and will be paid back gradually while still being a less cost to the town than its previous electric bill.

Lewis also initiated an industrial zone on the south side of town off 1200 South which will be home to various manufacturing and industrial businesses that will lease spots there. Currently, businesses for the area that are operating or in the works include a metal fabrication company, a paper shredding recycling facility, and a plumbing company.

“Sean is, to me, is probably the best town manager that we’ve ever had,” Fletcher said.

During a 2019 interview with the Gila Herald, Lewis said all of the improvements going on in the town were due to a community-wide push with everyone working together to make it happen.

“With doing the cleanups and with doing the town parties and things like that, it’s just community-based,” Lewis said. “That’s what I like about being here and that’s what I like about this job because before I had all these thoughts on what we should be doing but I didn’t have any authority to do any of it. And now we’re able to do these things that I think are important in a small community.”