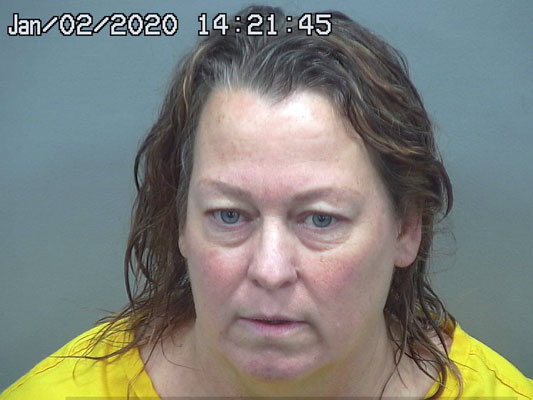 Contributed Photo/Courtesy GCSO: Barbara Herreras, 53, was sentenced to 2.5 years in prison and ordered to pay $59,250 in restitution in her embezzlement case.

Given 2.5 years in prison after pleading guilty to stealing roughly $60,000 from the town’s sewer fund

SAFFORD – Former Pima Town Clerk Barbara Herreras, 53, was sentenced to 2.5 years in prison on Wednesday, to be followed up by 5 years on probation regarding her embezzlement case.

Herreras previously pleaded guilty March 31 to reduced charges of attempted theft – a Class-3 felony, and forgery – a Class-4 felony. Herreras also stipulated to a restitution order of $59,250 and paid $5,000 in restitution on Wednesday. Herreras will be required to pay the first $17,000 in restitution to the town of Pima and the final $42,250 to its insurance company. The town previously was paid $59,250 by its insurance company and the additional $17,000 is to cover the amount the town said Herreras stole the previous fiscal year before the main theft in fiscal year 2017/18.

“I’m glad we can move on and put this behind us,” said Pima Town Manager Sean Lewis. “Barbara is our friend and all of us with the town hope she can find the help she needs. As a town manager, I must protect the town’s interests, and so prosecuting this crime has been very important to me as I represent the citizens of Pima. As we move forward, we want the citizens to know that we have made drastic changes to our policies and with help from the auditors we have protections in place to ensure this doesn’t happen again.

This is a sad day for the town of Pima, and we want to continue to serve the residents of Pima in the best way possible. We ask that Barbara’s family be given the respect of privacy during this time. They are an amazing family and deserve peace at this time.”

The Gila Herald initially broke the story on July 3, 2019, after an investigation into the theft began. Then, on Jan. 6, 2020, the Gila Herald reported Herreras had been arrested and booked into the Graham County Adult Detention Facility for the theft.

The Graham County Attorney’s Office filed charges of theft, fraudulent schemes/artifices, and forgery against Herreras on Dec. 12, 2019, and a warrant for her arrest was issued Dec. 16. On Jan. 2, Herreras was picked up in Greenlee County on her warrant and transported back to Graham County, where she was booked into the jail and held on a $75,000 bond.

According to police reports from the Pima Police Department and Graham County Sheriff’s Office, accountants first brought the $17,000 discrepancy to then Pima Town Manager Jeff McCormick after an audit of the fiscal year 2016/17 but McCormick chalked it up to Herreras not knowing how to enter the amounts into the bookkeeping software correctly. McCormick later resigned from his position amidst financial questionings from the Pima Town Council in lieu of being terminated in May 2017. Current Pima Town Manager Sean Lewis was immediately inserted as the interim manager and became the permanent manager officially in July 2017.

After Herreras complained that she had never been trained on how to do the bookkeeping, the town registered her for classes at Eastern Arizona College but she never attended.

In March 2018, Lewis was informed by Jim Usevitch of Colby & Powell PLC that large amounts of cash were missing from the town. When confronted by Lewis in an audio-taped conversation, Herreras admitted to stealing the money and agreed to quit in lieu of termination on March 19, 2018.