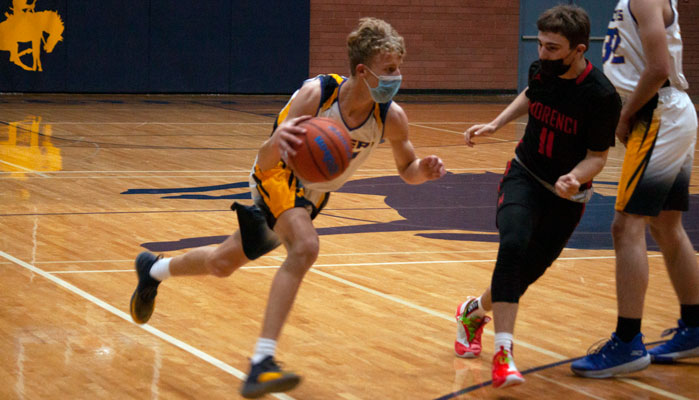 PIMA – The Pima Roughriders rode past Morenci, 68-37, on Friday night and look to solidify their top spot in the 2A East with a victory over region competitor St. Johns on Saturday.

The St. Johns game is a rescheduled contest from earlier when a snowstorm prevented the Redskins from traveling.

Morenci’s offense was suffocated Friday night – not by the masks they were wearing but by the staunch Pima defense that hardly allowed a shot attempt in the first quarter.

“We kind of knew coming into the year we’d definitely have more trouble on the offensive end than the defensive end,” said Morenci head coach Ruben Leonard. “Just making the bunnies, the little layups that we missed, and capitalizing off of turnovers – if we do that we’ll be alright. As of right now, we just need to figure out how to put the ball in the hole.”

Pima jumped out to a 16-0 lead to start the game and gave up just one field goal in the first quarter when Shawn Michael Chavez broke the drought with 15 seconds left.

“That’s something that we try to focus on – holding teams down where we don’t have to light it up every night to win games,” said Pima head coach Cliff Thompson.

There might be a coin shortage in Graham County, but apparently not in Pima as Tim Salyer was dropping dimes all night. In the second quarter, Salyer hit Grant Ashby with a beautiful drop-off for an easy bucket and then gave a no-look pass to Jacob Brimhall for another bucket. Brimhall then scored again on his own accord, and Pima was up 22-4 early in the second quarter. Salyer also finished with 10 points to go with his multiple assists.

Then the battle of number 5’s happened as Morenci’s Christian Mpoyo (number 5) and Pima’s Kaleb Blair (number 5) exchanged buckets and free-throws. Mpoyo would lead the Wildcats on the night with 12 points and Blair finished with 14.

Brimhall (12 points) then asserted his presence down low and hit on three field goals to help close out the first half with Pima up, 29-14.

Pima continued to extend its lead in the third quarter, as Kenton Skiba hit an early 3-pointer and then finished the quarter with a bucket to put Pima up 45-29 at the end of three. Skiba went for a game-high 17 points and started the fourth quarter by hitting three free-throws after being fouled on a 3-point attempt.

Morenci managed to cause some turnovers against Pima in the third quarter with some full-court pressure, but the Roughriders eventually began to break the press and hit layups on the other end. They were also without the services of Chavez, who fouled out in the third quarter.

“Overall, I think we had 12 turnovers for the game,” Thompson said. “That’s not a lot, but we turned over probably seven of those in the third quarter. Coming down the stretch, we need to take a little bit better care of the ball.”

Pima’s reserves continued to push the ball in the fourth quarter, and their fresh legs ran away with the victory, 68-27.

“I don’t think we’re a great offensive team,” Thompson said. “We’re a pretty good one though. If we make good decisions we’re going to be able to score some points. We’ve been really focusing on our defense this last couple of days and I think it paid off tonight. We want to continue that through the rest of the season.”

“We gotta keep brining it,” Leonard said. “We’ll be back.”

The Thatcher Eagles (1-3 region, 3-5 overall) lost to the Florence Gophers, 76-79 in double overtime. The Eagles will next host the San Tan Foothills Gophers on Tuesday, Feb. 9, starting at 7 p.m.

The Fort Thomas Apaches (1-0 region, 3-5 overall) defeated the Joseph City Wildcats, 61-48. The Apaches will next host the Duncan Wildkats on Wednesday, Feb. 10, starting at 6 p.m.

Mobile users slide left to view the pictures in the slideshow