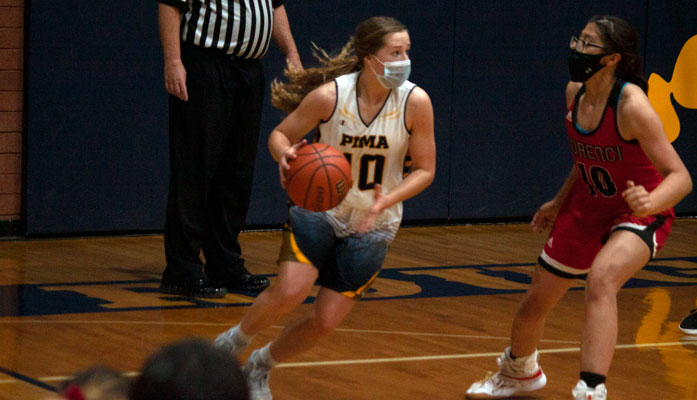 Jon Johnson Photo/Gila Herald: Aubrie Sherwood pushes the ball down the court. Sherwood led the scoring on the night with 18 as Pima defeated Morenci, 65-35.

PIMA – The Pima girls basketball team utilized a smothering defense that limited Morenci to just single-digit scoring in three out of four periods to remain unbeaten as the Roughriders dispatched the Wildcats on Friday night, 65-35.

“That game was sloppy but to win like that – it’s still big,” said Pima head coach Roy Corona.

The contest was brutal with more physical contact than some MMA fights. Players were slamming into one another, sending opponents to the deck on hard fouls and playing a hardened form of basketball.

“It was rough,” Corona said. “They were scrappy. They got after us. But, the way we shot, to win like that was big.”

Pima owned the boards against Morenci and ran them up and down the court but let some easy buckets go by as Morenci moved the ball up court quickly when a player would release and head out early.

However, after a 15-point opening quarter, Morenci could only muster 18 more points for the rest of the contest, with 5 in the second, 4 in the third, and 9 in the final quarter of play.

Aubrie Sherwood led the way for the Roughriders with 18 points. Neveah Grant also hit double figures with 13, followed by Ashlynn Chlarson and Ashlie Sherwood with 9 each, Saydee Allred with 8, Sam Pippo with 5, and Jayce McClain with 3.

“It went pretty good,” Aubrie Sherwood said. “I wish we could have shot better, but I felt like we played good defense . . . They were a tough team – real aggressive – but it feels good (to get the win.)

Destanyee Marquez led the way for Morenci with 10 points, followed by Devanie Medina with 9, Julianna Aguilar with 6, Jadah Cortez with 5, Hannah Sylvester with 3, and Delicia Roybal with 2.

The Duncan Wildkats (1-1 region, 5-4 overall) were defeated by the St. David Tigers, 16-52. The Wildkats will next travel to take on the San Manuel Miners on Saturday, starting at 4 p.m.