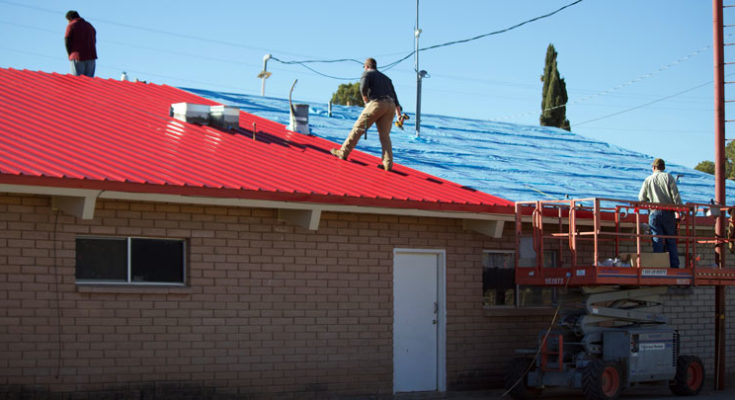 The roof was fully installed by Ward Brothers Enterprise LLC just in time for the rain Tuesday night and Wednesday morning.

The project was an extensive refurbishing of the roof, including replacing numerous plywood roof sections and all of the underlayment, as well as rebuilding a significant portion of the facia.

“We had quite a bit of construction on it,” Lewis said.

Joe Ward, of Ward Brothers Enterprise LLC, said the hard part of the project was removing the old roof. When the time came to install the new metal roofing, the project went quickly and smoothly.

Lewis thanked Freeport McMoRan for its generosity in helping the town help its volunteer fire department keep dry and operating at a high level.

“They (Freeport McMoRan Foundation) do so much for this community, and I’m not sure how much of it the public actually realizes it,” Lewis said. “The town of Pima sure does like Freeport right now.”

The company also has its hand in the building of the new OHS building as it gave a $25,000 grant in 2017 to help pay for the building’s concrete foundation.

“In the last year-and-a-half, we’ve built up a real good rapport with the foundation and the general manager up there,” Lewis said. “So, I’m hoping we continue to do business with them. They’re good friends of ours right now.”