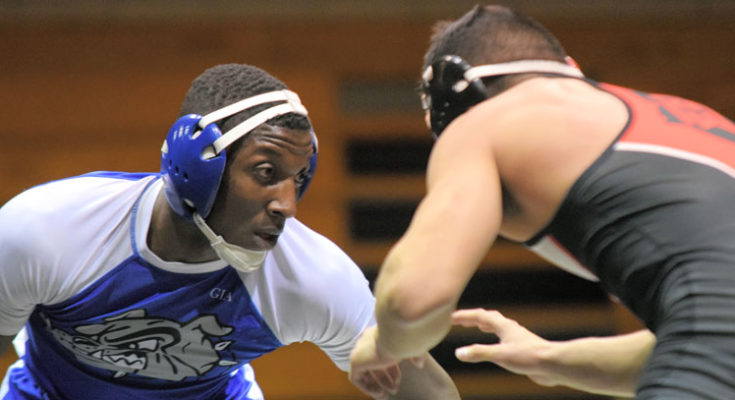 Raymundo Frasquillo Photo/Gila Herald: Dawson Andrews (152) pinned Morenci’s Cody Torres in the third period. Andrews was one of five Bulldogs who earned a win by pin during a meet in Morenci on Dec. 27. Morenci edged Safford 37-33.

MORENCI – As two juggernauts of the wrestling world collided, the Morenci Wildcats closed out its initial month of competition by defending its own turf and slipped past the Safford Bulldogs 37-33 in Wildcat Memorial Gymnasium on Dec. 27.

The teams had met a month earlier in Mesa during the two-day Red Mountain Invitational, with Morenci posting a 44-22 win.

Safford won five matches by pin and another by a 1-point decision in four extra periods following a 4-4 regulation deadlock.

The four-member St. David team fielded a lone competitor against both teams. Brayden Merrill (126) bested Andrew Bermudez of Safford and succumbed to Calvin Dunning of Morenci.

“These matches are all practice,” sixth-year Morenci head coach Casey Woodall said. “As long as they learn and improve every time they step on the mat, that’s all that matters to me. The meet that matters is the state-qualifying one.”