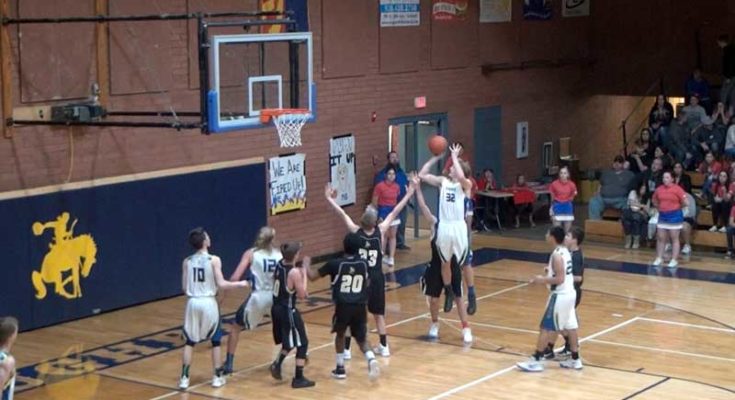 PIMA – The Tombstone Yellow Jackets (4-10 conference, 12-13 overall) may have played Morenci and Thatcher evenly, but they got in a hole early against Pima on Tuesday night and only dug deeper as the game continued. With a running clock and its junior varsity players taking over in the fourth, the Pima Roughriders (14-0 conference, 22-2 overall) still ran away with the victory, 73-22, and notched their 10th win in a row.

“I’m happy all the way around with the win,” Pima head coach Cliff Thompson said. “We did a really good job defensively, and I think it just kind of snowballed. They got frustrated.”

Tombstone didn’t have any players or any plan to deal with the juggernaut that is Pima’s Dawson Pruszynski, who cleaned the offensive and defensive glass all night and scored on multiple putbacks. Pruszynski only played about half the game due to the disparity in the score but still finished with a game-high 19 points.

Every big man needs someone to handle the rock and put the ball where he can score. While Pruszynski can zip by the defense from the top of the key himself, Trey Thompson had a near perfect game running the Roughrider offense and finding open looks for his teammates. Other times, Thompson put his nose down and hit a tough jumper or zoomed by his defender for a layup as he is known to do.

Pima is best, of course, when it is running on all cylinders, and when wings Frank Gutierrez and Andrew Taylor are hitting from deep to complement the inside/outside game, they look very hard to beat.

“My teammates did good and got me the ball and trusted me with shooting,” Gutierrez said. “Everyday we have to keep getting better and better. We can’t take a step back.”

Coach Thompson was thrilled with how his defense was playing as the Roughriders kept the Yellow Jackets to single digits in each period even while playing their reserves and junior varsity players.

“I was really happy with the second unit (and) third unit going in and playing really good defense,” Cliff Thompson said. “That’s what we’re trying to build is a culture of playing hard (and) playing good defense.”

The second half saw plenty of playing time for the reserve players, including Jake Whitaker, who made the most of his time and made his presence known.

Witaker was big down low and had a stretch of 7 points in the third period to finish with 9 for the game.

“I just decided to play aggressive,” Whitaker said. “I’m Dawson’s sub (and) he’s a good player, so when I get in I might as well give it all I got and give 100 percent. So, that’s what I did . . . I’m just a football player trying to play basketball.”

The fourth period featured a running clock and was manned by Pima’s junior varsity players.

Freshman Edward Young scored twice down low (even though the scorers missed one hence the difference in the reported score and the actual score) and freshman Tim Salyer hit a runner in the lane and a sweet 3-pointer from the baseline. Sophomore Drew Thompson also got into the act with a layup and a 3-pointer of his own as Pima downed Tombstone, 73-22.

Pima finishes up the regular season Thursday night at home against the Benson Bobcats (5-8 conference, 8-15 overall).

Thatcher will conclude its regular season at home Thursday night against the Willcox Cowboys (3-11 conference, 5-20 overall).

The Safford Bulldogs (6-4 conference, 15-10 overall) look to avenge an earlier season loss as they host the Florence Gophers (8-5 conference, 14-10 overall) on Thursday night. The Gophers beat the Bulldogs, 81-67, Jan. 16, but Safford twice beat Globe, which in turn has two wins in its two meetings against Florence.