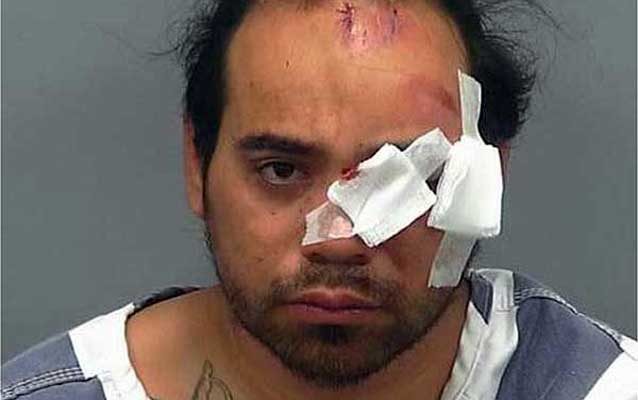 SAFFORD – An intoxicated man who was caught drinking a stolen bottle of Tequila at Walmart and using the store’s computer display to check his Facebook page wound up bloodied and in jail early Sunday morning.

Officers were dispatched to Walmart at 755 S. 20th Ave. regarding a man who had taken a bottle from the liquor aisle and began consuming it in the store. The man, later identified as Richard Rodriguez, 32, later concealed the bottle in his pants as he utilized the store’s computer.

Upon contact, Rodriguez showed obvious signs of intoxication and would not follow officers’ commands. During a struggle to take him into custody, Rodriguez allegedly punched an officer in the mouth and grabbed a TASER while also attempting to take one of the officer’s handgun.

Rodriguez was eventually given a TASER strike and was subdued to the point the police were able to escort him from the store.

On the way out, however, he bit an officer on the leg, which caused the officer to let go of Rodriguez, who promptly fell face first onto the store’s floor and hit his head.

Now bloodied, Rodriguez insisted on walking out of the store on his own but instead attempted to bite another officer. In the process, Rodriguez was sent again back face first into the concrete floor.

The suspect was then carried out of the store and was transported by Lifeline Ambulance to Mt. Graham Regional Medical Center for treatment.

After Rodriguez was medically cleared, he was taken to the Graham County Adult Detention Facility, where he was booked on two counts of aggravated assault on a police officer and theft.