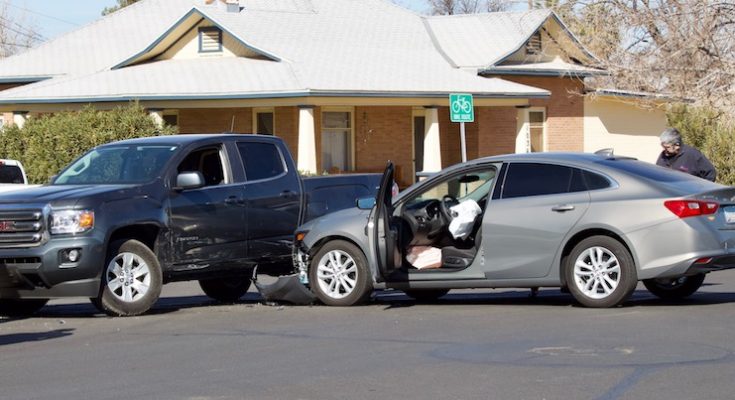 SAFFORD – A recently purchased truck driven by an employee on the way to be detailed was T-boned on Central Avenue at about 11 a.m., Thursday.

According to witness Kyle Matthew Harvey’s statement to Gila Valley News, the grey Chevy Malibu was headed westbound on 11th Street when it paused at the intersection and then proceeded across Central Avenue, apparently not noticing a southbound grey, GMC Canyon, which had just been sold the previous day from the Johnson Motors Corp., which specializes in GMC trucks.

“It was a straight-up sideswipe,” Harvey said. He described the sound of the collision as akin to a shotgun blast and was surprised the truck did not suffer more damage.

“As soon as I heard the airbag deploy I ran to see if anyone needed any help,” Harvey said. “I helped the woman out of her car. I asked the (driver of the truck) if he was doing alright and he said his wrist was hurting.”

Multiple officers arrived on scene and directed traffic around the collision. The impact of the car into the truck forced the truck into a street sign and utility pole but the pole appeared undamaged.

The female occupant of the Malibu was examined at the scene by paramedics from Lifeline Ambulance but did not appear to suffer any serious injury. Her vehicle, however, had severe front-end damage.

The male occupant of the truck was also checked out at the scene and had only a minor wrist injury.

The owner of the truck will have to wait a bit for his new vehicle, but Johnson Motors will be sure to make him whole with a brand new truck as soon as possible.

The driver of the Malibu will likely be given a citation for failure to yield as evidence at the scene and witness statements pin her as being at fault, but official police reports on the crash will not be available until Monday.