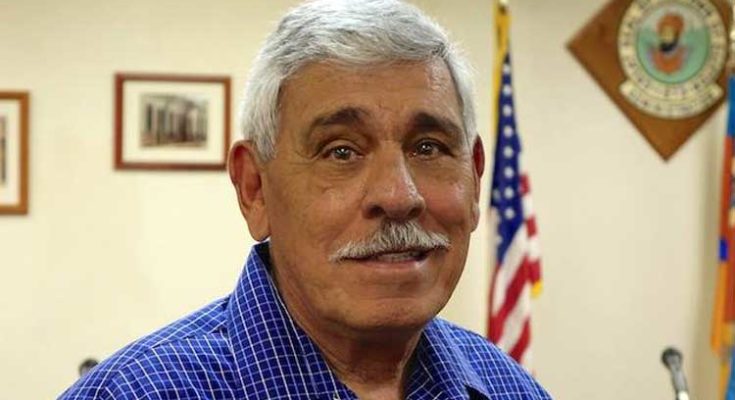 CLIFTON – He is well known and highly regarded in the Clifton community. He is a people person. He is Luis Montoya, the town of Clifton’s new mayor.

Montoya was elected to the position earlier this month by a majority vote of the Clifton Town Council. He had served as vice-mayor for the past two years.

There is not at present a vice-mayor to fill Montoya’s slot. A factor is that there are only six councilors on what is normally a seven-member body. Councilors Laura Dorrell and Barbara Ahmann were nominated for the position, and the vote ended in a 3-3 tie.

The open seat was created by the recent death of Mayor Felix Callicotte. The town is currently accepting applications to fill the vacancy.

Montoya is a lifelong resident of Greenlee County. He spent his adult life as an educator and was superintendent of Clifton schools for several years. He was chairman of the Clifton School Board that decided to close the schools at the end of the 2013-14 school year. The primary reason for the closure was the sharp decline of enrollment in the district. Basically, the school could no longer afford to operate.

Montoya was elected to the Clifton Town Council in 2016. Besides serving on the council, he has been involved in other community affairs. There is more. He continues working his family farm in York Valley. As one acquaintance put it, “Luis has maintained a strong bond with the land. That says a whole lot of good about him. He’s also a real family man and gets along real good with people. He’s a real people person.”

The resignation of Town Manager Ian McGaughey has created the need for an interim manager. He took a job as town manager in Somerton, near Yuma, in southwestern Arizona.   As of last week, the Clifton Town Council had received 17 applications for the town manager job. The council will meet May 3 to begin reviewing and discussing applications.

In the meantime, Castaneda will fill in as interim manager. She has a great deal of experience in town government. She has been with the town’s government since 1986. She first served as an administrative assistant and became town clerk in that late 1990s.

Castaneda has also been one of the driving forces behind the town’s annual Festival of Lights, which kicks off the Christmas holiday season locally. The festival has grown from a small event to one of Greenlee County’s biggest affairs. This December will mark the festival’s 22nd year.

Prior to leaving for Somerton, McGaughey said, ” I can’t think of anyone other than Espie more qualified to fill in until the council selects a new manager. She is indispensable with her knowledge of how town government functions – its ups and downs – and the town’s fiscal management.”