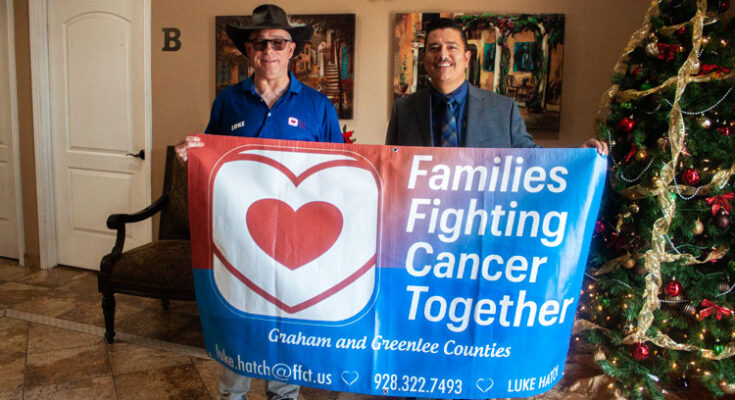 SAFFORD – Nearly 11 years ago, Luke Hatch had to do the unthinkable as a parent and bury his eldest son, Carson Hatch, 21, who passed away after a six-year bout with cancer.

Luke said while his family received wonderful church and community support, dealing with Carson’s disease became a financial struggle and over the years he felt the pull to assist families who may be going through similar struggles.

With that, he began Families Fighting Cancer Together (FFCT), a nonprofit organization that provides financial assistance to families in Graham and Greenlee counties who are affected by cancer or other life-altering pediatric illnesses.

“I had no clue what I was doing, but I didn’t want to focus on just cancer kids,” Luke told the Gila Herald.

Enter OneAZ Credit Union and its Legacy Impact Grant, which is funded by the OneAZ Community Foundation Grant Program, which in turn is funded partially by members’ debit card use with 1 cent going toward the foundation with each swipe. OneAZ Credit Union Safford Branch Manager Enrique Garcia said he learned of FFCT’s need and he sent it up the food chain, where it was quickly approved.

“At OneAZ, we try to be a force for good in the community that we serve,” Garcia said. “This Legacy Grant to Families Fighting Cancer will directly impact several families whose children are suffering from serious illness. We feel that no family should have to suffer pain watching their children battle these serious illnesses, and so we also believe that families shouldn’t have to go through something like that alone. That being said, we hope that this grant makes life for these families easier and lets them know that they’re not alone in this.”

Luke sought specific projects on his wish list and was awarded a grant of $32,500 to assist with special projects for the two families – to help clean up the backyard and make it safe for the blind child to play with her sister, and to pay for the family in Bonita with Brittle Bone Disease to finish a pressure-relieving aquatic float chamber. Their child was born with every long bone in her body broken and has had 150 breaks, according to FFCT, and floating in warm water is a place to get relief from her daily pain. After initial publication, Luke clarified that the remainder of the funds will be used to assist 10 other families he is working with as well and is dedicated as “holiday money”.

The rest of the money earmarked for the Bonita family will go to the construction of a sidewalk to make it easier to get to her vehicle from her home and funds to repair a wheelchair-accessible van they own.

While OneAZ Credit Union’s Community Impact Grant provides more than 5,000 grants to roughly 50 organizations each year, the funding for FFCT is from a new Legacy Impact Grant, which was launched this year. Since 2016, OneAZ Community Foundation has provided more than $1 million in grants and funding to Arizona nonprofit organizations.

This article has been updated with additional information regarding FFTC’s use of grant funds.