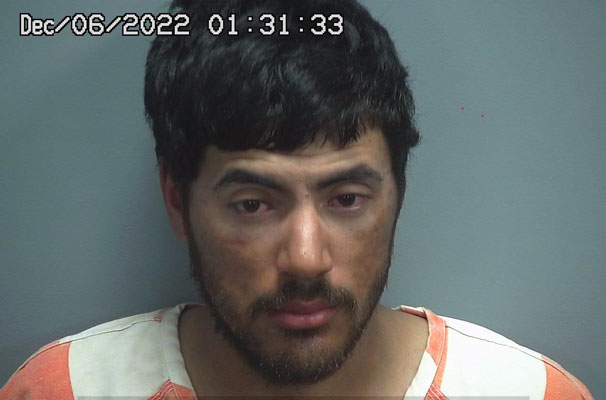 SAFFORD – A man with a previous DUI conviction increased the severity of his charges during an attempted police stop Monday night when he reportedly rammed his car into a fully marked Safford Police vehicle while intoxicated.

The suspect, Jesse Pedroza Contreras, 24, of Pima, was taken into custody at gunpoint after another Safford officer pinned his vehicle from behind.

During the arrest, Contreras was allegedly belligerent with officers and initially blew a .30 breath/alcohol content (Bac) percentage on a portable breath test (PBT). For reference, .08 is the threshold for a normal DUI, and .15 is considered an extreme DUI.

Due to his extreme alcohol level, the jail declined to accept Contreras. He was then taken back to the Safford Police Department where he was given water and time to sober up enough to register a Bac under .28 on a PBT to be accepted. He was then booked on charges of aggravated assault on a police officer, aggravated DUI, unlawful flight from pursuing law enforcement, criminal damage, and driving on a suspended license.

According to a Safford Police report, an officer initially attempted a traffic stop on Contreras’ car when he noticed it pull onto Highway 70 without its headlights on at about 5:55 p.m. at night.

As the officer began to follow Contreras, he noticed the vehicle drift back and forth between lanes several times. At that point, the officer attempted a traffic stop by activating his emergency lights, however, Contreras failed to yield and continued drifting between lanes while westbound on Highway 70 at a slow rate of speed, roughly 25 – 35 mph in the 35-mph zone.

After going through the intersection with 20th Avenue, the officer activated his siren as well. Contreras continued westbound but then stopped at the intersection with the Bashas’ traffic light even though it was green. The officer then instructed the driver (Contreras) to exit the highway and Contreras reportedly drove across four lanes of traffic into the Bashas’ parking lot at a higher rate of speed.

Contreras then headed eastbound through the shopping center’s parking lot. A second Safford officer began approaching from Highway 70 and Contreras turned north into the roadway between the Taco Bell and Sonic restaurants. At that point, the second officer was southbound on the same road and Contreras accelerated and rammed the front of the officer’s patrol vehicle, causing an estimated $1,250 in damage.

Several empty beer cans were found in Contreras’ possession, but he refused field sobriety tests and insisted he hadn’t been drinking alcohol.

During Contreras’ arrest, the officers learned of a previous DUI charge and that Contreras’ license was suspended. He also had no vehicle insurance and an expired registration. A Thatcher officer conducted the private property collision investigation, and the vehicle was towed from the scene.

Prior to being booked into jail, an officer retrieved a blood sample from Contreras that was sent to an Arizona Department of Public Safety laboratory for testing purposes.