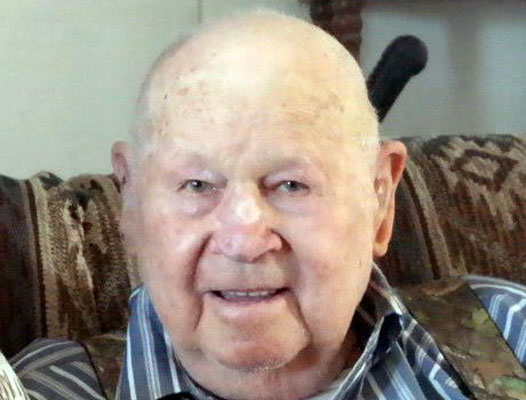 Arnold “J” Norton entered into eternal rest in his home on Jan. 5, 2021, in Pima, Arizona, at the age of 92.  He was also known as Arnold, Jon Arnold, and Jon Sippy by many of his friends.  Arnold was born on March 18, 1928, to Walter Samuel Norton and Ethel Irene Nelms Norton, the fourth of 10 children.

He joined the Navy hoping to see the world but never left the United States.  He married Wanda Lee Jones on June 25, 1950, in the front yard of his parents’ home, in Hubbard, Arizona. Together they were blessed with six children, Eldon, of Pima, Eddie (Lisa Robinson), of Pima, Randy (Kris Howard), of Duncan, Jon, of Pima, Nancy (Kevin Dandoy), of Gilbert, and Davy (Brenda Talley), of Pima.

They lived in many places, including Bonita and Eden, but mainly lived in Pima.  Arnold worked for the mine in Miami, was a farmer for the Mattice Farms, and for the Arizona Highway Department, and after retiring, fulfilled his dream of being a ditch boss for both the Highline and Union Canal before finally retiring a few years ago.

He loved his family and never missed a sports game that his children played in or any other important school functions.  He was a member of The Church of Jesus Christ of Latter-day Saints and served faithfully in all of his callings.

Arnold is survived by his six children.  He has one surviving sibling, Kenny (Lil), of Globe, Arizona; two sisters-in-law, Barbara and Carolyn, and many nieces and nephews.  He is also survived by his 22 grandchildren; 60 great-grandchildren, and by Wanda’s brother, Buddy Jones (Sue Thompson), of Bryant, Arkansas.

He was preceded in death by his parents, and eight of his siblings, Norman, Arewood, Hazel, Edna, Arthur, Albert (infancy death), Max “Porky”, and Marva Lou “Lulu”.  In December of 2020, he lost his sister-in-law, Wilma, and her husband, Donald Jones.

A viewing was held at McDougal’s Caldwell Funeral Chapel (112 E. Main St., Safford, Arizona) on Saturday, Jan. 16, from 9 until 10:30 a.m.  A funeral procession to the Pima Cemetery followed, with graveside services beginning at 11 a.m.