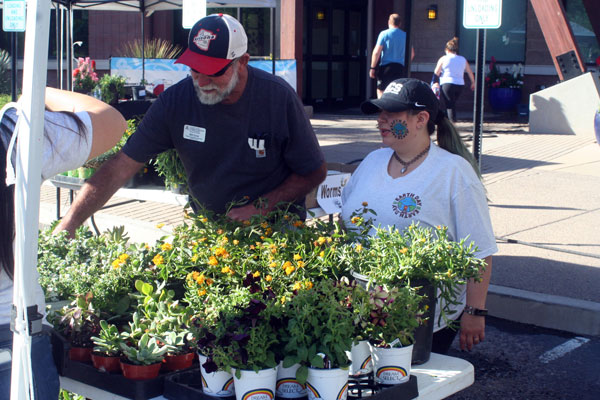 Walt Mares Photo/Gila Herald: Master Gardener Bill Cook and a Morenci Community Center staff member were part of the Earth Day celebration in Morenci. Cook is with the University of Arizona Extension program. It and the Gila Watershed Partnership contributed time and effort to the event organized by Morenci Community Center staff. Hundreds of plants of different varieties were given free of charge to the public.

Amazing. It began more than a half-century ago and is only growing stronger. That is Earth Day and its 52nd anniversary was celebrated around the world on April 22. It included an observance that was quite special and unique at the Morenci Community Center.

The MCC staff had several tables set up on which a wide variety of plants were displayed. There were also many plants beneath the tables. Part of what made the day special was that all of the plants were offered free of charge to the public. The many types of succulent plants, related to cacti, offered to the public were among the most unique. The plants are smooth and looked somewhat akin to a blossoming flower. Also, none of them had barbs or stickers as do most cacti.

Along with the Morenci Community staff, the Gila Watershed Partnership and the University of Arizona Extension Service participated in the event. Master Gardener Bill Cook of the U of A Extension helped people identify various plants and offered information on how to care for them. That included how much certain plants should be exposed to the sun and how often they should be watered.

The tables were set up under canopies as the sun shone brightly and very warm weather arrived. The outdoor temperature was above 80 degrees.

The Morenci Community Center is under the auspices of global mining giant Freeport-McMoran. It owns most of and operates the Morenci open-pit copper mine, which is the largest such operating copper mine in North America.

An observer said, “I tip my hat to Freeport for being so environmentally conscious and playing a role locally to observe Earth Day. That is really cool, especially for a mining company.”

The first-ever Earth Day was observed in 1970. There are those who have little or no memory of the event, especially those from remote rural areas. If anything, it may have been considered a city thing involving do-gooders. Meanwhile, it was a big thing, a momentous event in places such as Paradise Valley, where Susan Breen attended Camelback High School. It is near Phoenix.

Breen, a long-time educator who has lived in Clifton for almost 40  years, recalled how Earth Day was a very, very special event at her high school. She and a close friend had just received their driver’s licenses. That was a big deal as her friend had access to a car. It was something they looked forward to, but they instead rode their bicycles to school on Earth Day. At the time the criteria to support Earth Day was to walk or bicycle wherever a person traveled to and from. Those observing the day were asked not to travel in vehicles or any other motorized means of transportation.

“We thought that was pretty cool,” she said adding that several students at the high school who usually drove cars instead walked or rode bicycles Breen said over these many years she has observed Earth Day in one form or another.

Earth Day, an event to increase public awareness of the world’s environmental problems, is celebrated in the United States for the first time on April 22, 1970. Millions of Americans, including students from thousands of colleges and universities, participated in rallies, marches, and educational programs across the country.

According to the History Channel website, Earth Day was the brainchild of Senator Gaylord Nelson of Wisconsin, a staunch environmentalist who hoped to provide unity to the grassroots environmental movement and increase ecological awareness. “The objective was to get a nationwide demonstration of concern for the environment so large that it would shake the political establishment out of its lethargy,” Senator Nelson said, “and, finally, force this issue permanently onto the national political agenda.”

Earth Day has been celebrated on different days by different groups internationally. The United Nations officially celebrates it on the vernal equinox. The 1962 publication of Rachel Carson’s book Silent Spring —about the effects of pesticides — is often cited as the beginning of the modern environmental movement in the U.S. Sustainability, organic eating, and the “back-to-the-land” movement continued to gain steam throughout the 1960s.  According to the History website, the first Earth Day indeed increased environmental awareness in America, and in July of 1970, the Environmental Protection Agency was established by special executive order to regulate and enforce national pollution legislation. Earth Day also led to the passage of the Clean Water and Endangered Species Acts. The measure enacted to form the EPA was done by then-President Ricard Nixon. 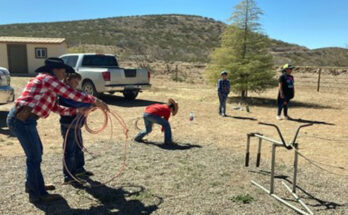