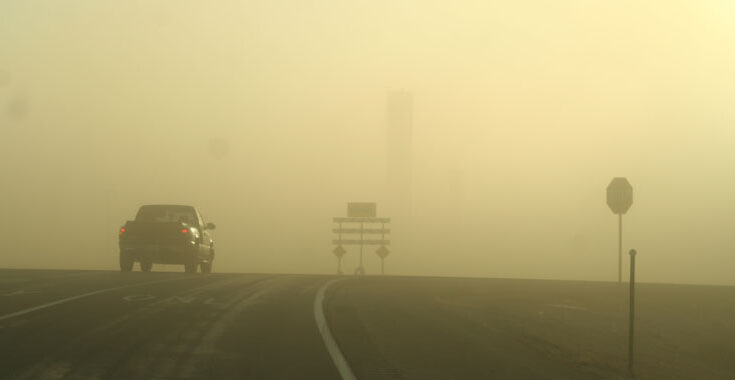 Walt Mares File Photo/Gila Herald: Visibility became very poor on U.S. 70 between Duncan and Lordsburg, N.M. on March 9, 2022. The terrain is flat, allowing the wind to blow without any interruption. Heavy winds blew on April 22 hit hard in Greenlee and Grahm counties in Arizona.

The wind was not seen but dirt in the air was

Indeed, who has seen the wind here in Greenlee County? It has not been the wind that is being seen but blowing dirt, in the form of some heavy, dark conditions making motorists’ visibility difficult.

There have not been what one might call dust storms. Instead, calling them “dirt storms” seems much more appropriate.

The wind has been blowing hard intermittently since early March, more than a month ago.

On Friday, April 22, winds knocked down many things such as a large, heavy umbrella in a backyard in Clifton. The umbrella was situated on the side of a house that should have protected it from the wind, but it did not.

At Starbucks in Morenci, its patio is usually shaded by four large umbrellas. Instead, they were folded and propped up against a wall to keep them from falling on customers or blowing into a parking lot and possibly damaging vehicles.

Pity any lady who may have been wearing a skirt that day.

People driving mid-size vehicles on U.S. 191 between Clifton, Three-Way, and Duncan or toward Safford in neighboring Graham County could feel their vehicles often blasted by wind gusts. It was wise to keep a tight grip on the steering wheels.

The high winds also blasted folks in Graham. According to an unofficial report, winds blew as high as 45 miles per hour in Safford on Friday. That resulted in an early end to the first day of its Spring Festival. It is not known for sure but the wind in Greenlee may have blown equally fast.

In Greenlee recent days have been calm and daytime temperatures have climbed to the 70s and even into the high 80s. That has made for some very pleasant nights. But there was a turnaround in pleasant nighttime temps on Friday night in Morenci and Clifton. By dusk, winds chilled the air and folks donned sweatshirts and coats when earlier in the day they had been wearing trunks and T-shirts.

It reminded me of a trip I took with my wife in early March to Silver City, New Mexico. Initially, there was a dark cloud of dust on U.S. 191 as they approached Three-Way, about 10 miles south of Clifton. The sky was fairly clear as we drove from there to Duncan, 20 miles south of Three-Way.

From Duncan, we turned on to U.S. 70 and headed to Lordsburg, New Mexico. When we crossed the Arizona-New Mexico state line about six miles from Duncan it became what looked like a different world. We encountered a heavy dirt storm and drove well below the 65-mile-per-hour speed limit. We slowed to 45 and sometimes 35 because visibility was so poor.

It stayed that way until we reached the turnoff near Lordsburg en route to Silver City and we breathed a sigh of relief. The sky was fairly clear to Silver but the wind gusts remained strong.

Instead of dirt blowing, we encountered a tumbleweed storm. For the first 10 miles or so en route to Silver the terrain was flat, and we were constantly barraged by tumbleweeds flying across the highway.

“Yeah I am quite familiar with tumbleweeds blowing around but it was like nothing I had ever experienced. That’s why I called it a ‘tumbleweed storm.’ I’m just glad I wasn’t on a horse,” I said to my wife.

It immediately reminded me of the song “Tumbling Tumbleweeds” sung by the Sons of the Pioneers. It is one of my favorite songs but it took on a very different meaning when I heard tumbleweeds crashing into the side of the car and they sometimes slid beneath it. Then I could hear the weeds lodged under the car as they were dragged along under it all the way to Silver City.

The landscape was covered most with juniper trees that have short pine-like appendages Along the way there are no trees with long branches and leaves to be shaken by the wind. That made it virtually impossible to gauge how hard the wind was blowing.

At last, we reached our destination. As we stopped at a convenience store at the edge of town, we exited our car and were met with fierce gusts of wind and it was cold. Still, it was a relief from what we had just driven through. The sky was clear and there was not any dirt in the air.

The drive back to Clifton in the late afternoon was quite pleasant. The wind had died down and what was now floating in the air made for a beautiful sunset.