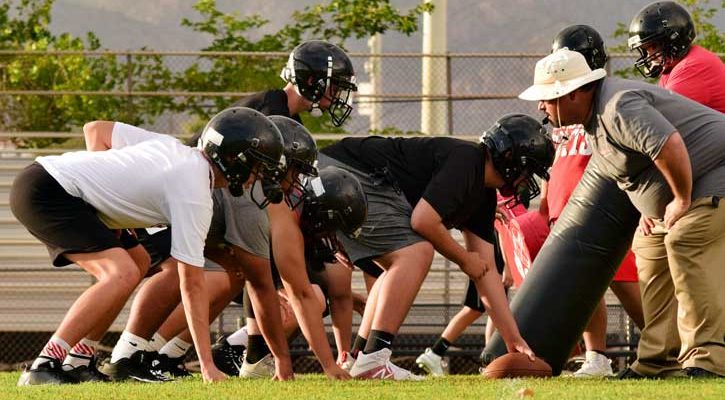 Photo By Raymundo Frasquillo: The Morenci Wildcats practice a running play in their first week of practice. They have since donned full pads and are preparing for their opening season game against defending state champion Thatcher.

Morenci gears up for football season

MORENCI – Morenci student-athletes were greeted by several days of extremely high heat during the first week of practice sessions, beginning July 23. Twenty-seven were on hand for the first day of practice and 38 of 40 signees took the field at week’s end. The class breakdown is 14 seniors, 11 juniors, eight sophomores, and seven freshmen.

The Wildcats don full pads for nine days of contact and conclude week three practice sessions with a home scrimmage against the Douglas Bulldogs on Aug. 10.

Amidst high temperatures, driving rain showers, or high humidity, several student-athletes sought improvement on the gridiron through 7-on-7 sessions along with daily weight room sessions during June and July.

They were not trying to keep up with the Joneses, but rather, an improvement was the reason Morenci football players braved the elements during the off-season.

A four-day fundamentals camp with morning and evening sessions was held in Lawson Stadium July 9-12, concluding with a big man competition and a 7-on-7 session in Lordsburg, New Mexico on the final day.

Weightlifting sessions continued July 16-20, and the Wildcats hosted a final 7-on-7 session plus big man competition with three Land of Enchantment teams, Bayard Cobre, Lordsburg, and Silver on July 17.

Noticeable improvement was demonstrated by each of the 36 participants said second-year MHS head coach David Gallegos.