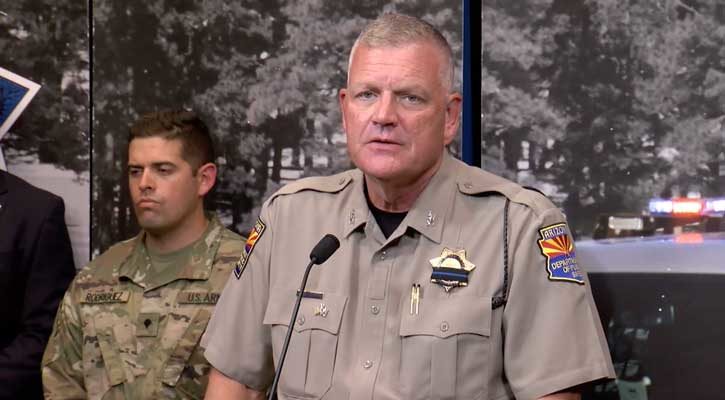 AVONDALE – A man who shot and killed Arizona Department of Public Safety Trooper Tyler Edenhofer, 24, has been charged with first-degree murder.

The suspect, Isaac D. King, 20, of Avondale, has also been charged with two counts of attempted first-degree murder, four counts of aggravated assault, three counts of endangerment, and resisting arrest.

King had been placed in a medically-induced coma after being injured during a struggle with three troopers. During the struggle, King, who has a history of mental illness, managed to remove a gun from Edenhofer’s training officer, trooper Sean Rodecap, and fire at both Edenhofer and trooper Dalin Dorris. Edenhofer was fatally shot and Dorris was shot in the shoulder. Dorris was taken to a local hospital for treatment, along with Rodecap, who was also injured during the struggle but not shot. Both were treated and released. Edenhofer had been on the job for just 52 days.

The officers had responded to reports of a man in the roadway throwing rocks at eastbound vehicles along Interstate 10 near Avondale Boulevard at about 10:17 p.m. on July 25.

After the shooting, two Goodyear Police officers also arrived at the scene. From start to finish, it took the officers eight minutes to take King into custody, and only after a TASER had been deployed.

During a press conference, DPS Director Col. Frank Milstead described the importance of how his troopers interact with those with mental illness and lamented on the loss of his trooper.

“This is a very dark day for the Arizona Department of Public Safety,” Milstead said.

The DPS’ investigation into the incident is ongoing as well as an internal investigation as to how the troopers responded to the situation.