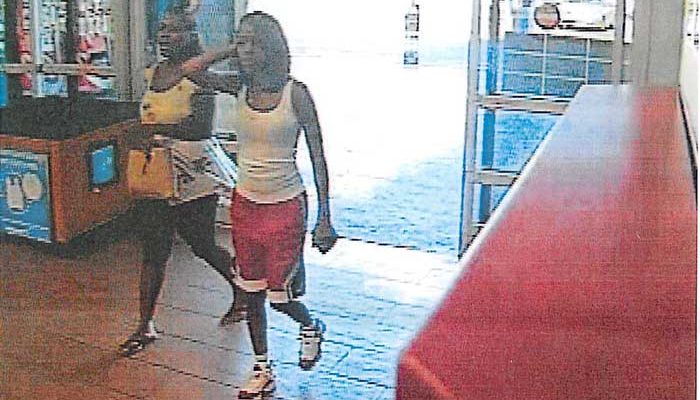 Contributed Photo/Courtesy SPD: These two women allegedly defrauded Walmart out of $10,000 by convincing a cashier to fill 10 Green Dot cards without paying for it.

SAFFORD – Two African-American women walked into Walmart on Thursday, July 19, and walked out $10,000 richer after convincing a Walmart associate to place $1,000 on 10 separate Green Dot cards.

A Green Dot card is a prepaid Visa or debit Mastercard that can be reloaded.

According to a Safford Police report, the women walked into the Walmart at 755 S. 20th Ave. at about 9:28 a.m. and proceeded to a register. Once there, they advised the cashier that they needed to put money on their Green Dot cards.

The cashier is a new employee and didn’t know how to perform the required task, but the suspects advised they used to work for Walmart and took her through the process step-by-step.

After the cashier loaded $1,000 each on 10 cards, the women told the cashier they had to get the money out of their car and then left in a silver SUV.

The cashier failed to notify her supervisor of the situation, which goes against Walmart training, according to an asset protection employee. Because of that, Walmart didn’t learn of the theft until the following day, July 20. By then, all the money had already been spent from the cards, according to the Green Dot Corporation, which advised the store would have to take the loss.

As of Monday afternoon, the suspects had not been located and the case is still open. A Walmart manager advised other stores in the state had been hit by the same scam.