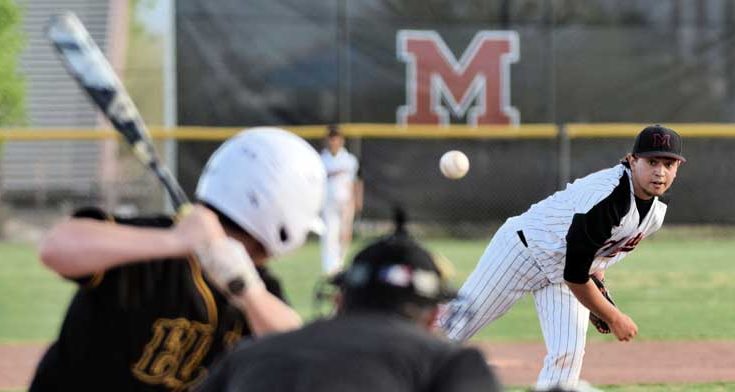 Photo By Raymundo Frasquillo: Senior David Corona delivers a pitch in a home game with Round Valley March 22. A green monster was added to the Francis Waldorf Stadium’s centerfield this season.

The Wildcats (8-4-1 overall, 7-1-1 seeding, 4-1-1 East Region) debuted as the 2A top team during the inaugural season rankings on March 27, slipped past the Thatcher Eagles 5-3 that evening and succumbed 9-1 to the Pumas in Bisbee two days later.

“The bad thing about being the No. 1 team is everybody is gunning for you,” Morse said.

Prior to the rankings release, Morse felt the Wildcats would be in the top 10, but not No. 1, a ranking which had eluded the program.

Five more region games remain for the Wildcats, beginning with Tombstone on April 7, Willcox on April 12, and Bisbee on April 14 in Francis Waldorf Stadium, plus at Benson on April 23 and at Thatcher on April 25.

The non-region games include going to Safford on April 10 and participating in the nine-team, three-day Morenci Lions Club tourney April 19-21.

In short, Morenci did not take it’s A-game to historic Warren Park. It was not the outing the Wildcats thought they would have.

Defensively, the Wildcats got two outs before a pair of errors allowed Pumas on and a single scored one before the third out was recorded in the bottom of the initial inning.

Six Bisbee batters also stepped to the plate in the second inning, loading the bases with no outs, but the Pumas left them loaded as a strikeout plus two fly outs were recorded.

A one-out beaned batter was followed by another fielding error and the runner scored before two more outs were recorded in the third inning.

Trailing by two, a one-out beaned junior Trey Trujillo reached first base, advanced on a Bisbee fielding error, and scored on a balk. The Wildcats loaded the bases, but a pair of strikeouts sent them back on defense.

Morenci sent 10 batters up during the next three innings with only one able to reach first and advance to third.

Bisbee sent seven batters to the plate in both the fourth and fifth innings, adding three and four more runs, respectively.

A Morenci double play on the first two batters in the sixth, was followed by a single, and a fly out.

On the mound, senior David Corona yielded nine hits, walked four, beaned two, and struck out one while facing 35 batters during six innings.

The visiting Eagles broke a 2-2 deadlock in the fourth inning, with a two-out senior Brandon Goodman double advancing on a fielding error and scoring on a balk.

Morenci followed that by singling in a pair of runs with two outs. Senior Justice Boling drove in a beaned sophomore Zachary Waltrip and singled senior Jacob Munoz. He crossed home plate on a passed ball to complete the scoring. A walked batter and ground out ended the inning.

Eight of the next nine Thatcher outs were strikeouts and the other a fly out.

Morenci went three up and three down in its last to plate appearances.

The Eagles scored their first two runs during their initial plate appearance. Senior Justice French tripled in singled juniors Seth Lunt and Jovan Montoya with two outs. He remained on third as the ensuing batter struck out.

Morenci’s initial two runs were scored in the second inning on a singled Roybal being sacrificed in by junior Trey Trujillo and a singled Zachary Waltrip crossing home plate on a two-out throwing error.

The Wildcats finished their historic day by batting .230 (6-26), leaving three runners on, and committing four errors compared to .172 (5-29), four stranded runners, and three errors by Thatcher.

Mound junior starter Desmond Sandoval struck out 17 and allowed five hits while facing 26 batters during six innings. Corona struck out the three batters he faced during an inning of relief.

On the mound, Lunt gave up six hits, struck out five, walked two, beaned two, and yielded a sacrifice while facing 25 batters during 5 2/3 innings. Junior reliever Treven Clark faced one batter during 1/3 inning.