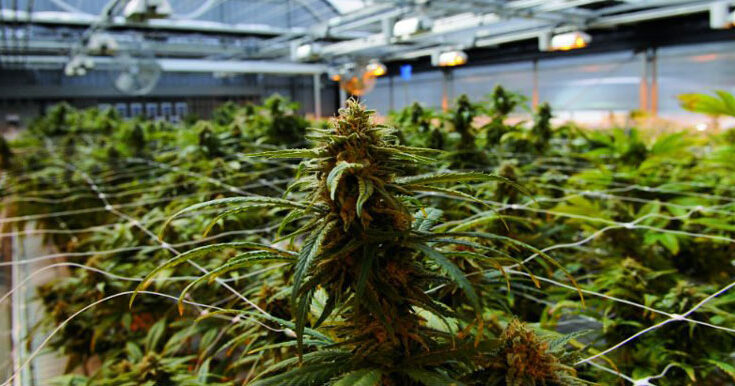 Contributed Photo: A Maricopa County group is attempting to stop cannabis from being grown in Graham County and has filed both an initiative to tax it out of business and a referendum to have a BOS vote revisited by all of Graham County’s registered voters.

Attorney believes effort may be competition based

SAFFORD – A Maricopa County group calling itself “Protect Graham County No to Drugs” is attempting to shut down upcoming cannabis cultivation in Graham County.

One aspect – a proposed initiative – claims to benefit first responders and drug prevention when, in reality, it would do neither since tax money to be raised by the initiative would be nonexistent, according to cannabis producers.

The other is a referendum seeking to place a decision made by the Graham County Board of Supervisors regarding a zoning change to allow cannabis to be grown in a greenhouse on the NatureSweet property in Bonita up for a vote from all registered voters in the county. The zoning change was a necessary aspect for NatureSweet to sell two greenhouses to Bayacan Inc., which wants to start growing cannabis at the Site 6 greenhouse. The sale will enable NatureSweet to continue to run its other greenhouses and turn Site 1 and possibly Site 2 greenhouses into a state-of-the-art research and development center. The move to cultivate cannabis in the former NatureSweet greenhouse is supported by the education and business community.

The BOS unanimously approved a rezoning request from Colvin Farms on April 19 to allow a 35 to 37-acre cannabis cultivation site in Eden (to be run under the name Graham Mountain Flowers), and on July 21 the board voted 2-1 to allow the cultivation of cannabis at NatureSweet’s greenhouses 5 and 6, which will be sold to Bayacan Inc. for the facilitation of the cannabis cultivation. Colvin Farms has also operated a 100-acre hemp farm for the last two years in the same area.

The Maricopa County group’s initiative would basically stop all cannabis cultivation in Graham County due to the extremely high tax proposed, and the referendum filed by the same group would put the BOS’s decision on the Bonita grow to the voters of all Graham County.

The group’s treasurer, Timothy Sifert, president of the American Campaign Finance Foundation in Scottsdale, filed an initiative application on June 30 that would amend the code of Graham County to impose a $1,000 occupational permit fee to cultivate cannabis, with an additional tax of $1,000 per pound of cannabis or cannabis byproduct sold. The referendum was filed at the July 6 BOS meeting in an effort to place the board’s decision to all of the county’s voters.

Siefert was reportedly paid to file the applications, and the chairman of the group is identified as Kenneth Daniel Krieger, a retired chiropractor.

While the $1,000 tax on cannabis would double the current sale price in some cases – depending on the quality and variety – the “byproduct” wording would mean any other part of the plant would also be taxed at $1,000 per pound, including leaf trimmings which currently are sold at about $300-$500 per pound, according to Heather Dukes, an attorney for Bayacan Inc.

The tax is being sold to the public as benefitting public safety and drug abuse prevention with tax revenue generated being used for that purpose, however, since it would effectively end all cultivation there would be no tax collected to go toward such things.

Dukes said the sale of trimmings is a big part of any cultivation facility’s operation and that such a tax would be up to 300 percent of what they are currently sold for, effectively stopping that business in Graham County.

Conversely, there is a 16 percent excise tax on the sale of recreational marijuana (cannabis) on top of state and local sales taxes. Medical marijuana users only pay sales tax – about 5.6 percent for the state – and any county or city sales tax. The proposed initiative would not affect the sale of cannabis in any way, shape, or form, in Graham County, only farms’ ability to grow it here.

For that reason, and others, Dukes believes the initiative is likely competitor-driven from other cultivation facilities in other counties.

And, “Protect Graham County No to Drugs” chairman Kenneth Krieger is no stranger to NatureSweet or attempting to stop cannabis cultivation in one of its former greenhouses as he tried to do the same thing at NatureSweet’s former facility in Snowflake. Krieger’s group at that time, called “Citizens for a Safer Snowflake” was involved in a lawsuit to stop Copperstate Farms from growing cannabis there. The lawsuit was eventually dismissed, and Copperstate has flourished in the former NatureSweet greenhouse site. It was recently given the approval to expand operations and it employs hundreds in the community while generating hundreds of thousands of dollars in tax revenue.

Dukes said if the initiative somehow is passed, it would end not only Bayacan’s and Colvin Farms’ cultivation efforts but would shut down NatureSweet’s proposed research and development center, and cost hundreds of jobs and hundreds of thousands of dollars in tax revenue each year. She said it appears that the effort may be competitor-driven.

“If they are successful, these jobs will not be here,” Dukes said.   “I can’t speak for (Graham Mountain Flowers) but I think it would be very difficult if not impossible to operate a cultivation operation in Graham County, and I think, realistically, that is the end goal at what these two processes are being aimed at is to prevent cultivation in the entire county.”

“It is impacting future jobs and economic growth for the county for the benefit of someone else growing the same exact product in a different region of Arizona.”

“I think it would cause any company like ours to not be able to afford to do business in Graham County,” Edwards said.

While looking into the legality of the two applications, Dukes said Bayacan is moving forward with its plans to start cultivation at the Site 6 greenhouse in Bonita.

“Nothing is on hold,” Dukes said. “We are continuing to move forward . . . We’re here to stay. We really are. We want to make this work, and we’re going to do everything in our power to overcome these two applications.”

Graham Mountain Flowers has already hired 25 – 27 new employees and has begun construction on its site in Eden, including a 10-foot solid fence to encompass the facility. The group looks toward increasing the job total to about 60 in the near future, according to Edwards.

“We’re very excited to bring jobs to the community,” she said. “We’ve found some great people. So far, we have a wonderful team.”

Graham County Chamber of Commerce Executive Director Vance Bryce has advised that some people who previously signed the petitions under the guise of community safety didn’t realize the full impact of what they were signing. Those who feel that way can have their names taken off the petitions by visiting Graham County Elections Director Hannah Duderstadt at the Graham County General Services Building at the intersection of 10th Avenue and U.S. Highway 70 (Thatcher Boulevard) in Safford. There, people can sign a statement to be taken off the petition.

If the initiative petition gets the necessary 1,596 signatures required, it could be placed on the next election ballot. The group has until July 8, 2022, to turn in the qualifying signatures to make it onto the Nov. 8, 2022 election.

The same goes for the referendum, however, it only needs 1,064 signatures and must be turned in by Aug. 5, according to rules and regulations.