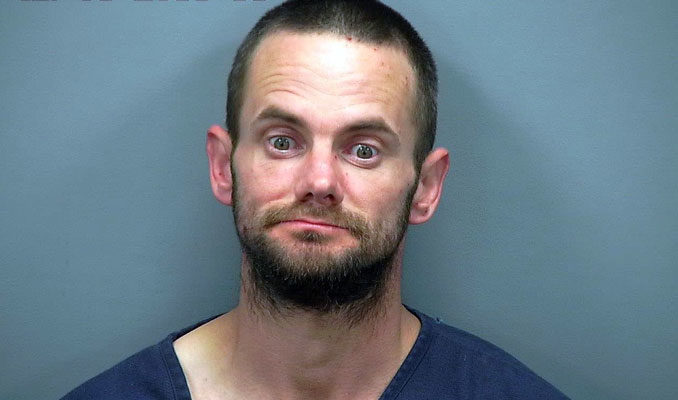 Contributed Photo/Courtesy GCSO: Jerry Morris, 35, was booked into the jail on charges of assault, criminal damage, and disorderly conduct after allegedly throwing a light bulb at his brother’s girlfriend.

SAFFORD – Frequent flyer Jerry Morris, 35, was arrested and booked back into the Graham County Adult Detention Facility on Saturday, March 30 after allegedly throwing a light bulb at his brother’s girlfriend.

Morris was booked into the jail on charges of assault, criminal damage, and disorderly conduct.

Morris had just gotten out of jail after being incarcerated March 22 for disorderly conduct. He was also previously booked into jail for criminal damage in January and was arrested and booked into the jail at least nine times in 2018. Those cases included a variety of charges – some involving the same woman as the most recent charge – and also included an instance when he was accused of brandishing an 11-inch knife to a group of bicyclists who were looking for a hotel room near the area of U.S. Highway 70 and Entertainment Avenue.

On Saturday, authorities were dispatched to an area on 9th Street just prior to 7 p.m. regarding a plotted 911 hangup call. While en route, an officer located Morris walking northbound on Central Avenue and contacted him. During that discussion, officers learned the incident actually occurred at Morris’ residence on 3rd Avenue, where his brother and his brother’s girlfriend also both live.

Officers then responded to the residence and met with the victim, who said Morris was buttering crackers in the kitchen when he accused her of spying on him and threw a large, halogen-type light bulb at her, which broke next to her bare feet. The victim did not suffer any lacerations even though fragments struck her, according to the report.

Morris admitted having an argument with the victim and throwing the light bulb but said he didn’t throw it at her. He was then booked into the jail without further incident.