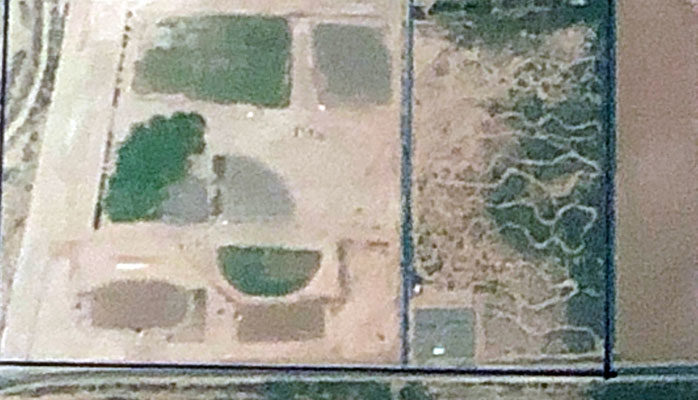 The town of Pima is looking to rezone this area by the Vard Lines Memorial Roping Arena and ballfields into an industrial zone to attract manufacturing businesses.

PIMA – Building on its success with the Optimal Health Centre, the town of Pima is considering creating an industrial zone south and west of the Pima Cemetery on town land to bring in more businesses to the area.

While the town purchased the land for the Optimal Health Centre and built the building, the proposed zoning change would be on land already owned by the town and any business would be required to build their own facilities.

Pima Town Manager Sean Lewis brought the proposition to the attention of the Pima Town Council at its Tuesday night meeting and said multiple manufacturing businesses have already expressed an interest in relocating to Pima. Among them are a paper bailing business, one that does steel fabrication, and a parts manufacturer – all industries that operate completely indoor.

The area in question is town-owned land south and west of the Pima Cemetery, and the rezone would include the Vard Lines Roping Arena, baseball, and soccer fields, however, nothing would change at those venues. Lewis said a of businesses are very interested in setting up shop in an area south of the cemetery with frontage along 1200 South.

“That that we’ve had for way longer than any of us have been around here and it’s never been used for anything,” Lewis said. “So, to me, if we could use i for some type of positive development – bring in employees and businesses here – I think that works well.”

Currently, the lane is zoned residential/agriculture. Lewis said he has also had discussions with businesses in creating a storage yard near the water tanks in an area where residences cannot be built due to the clay content in the ground. He said one could go out there and dig up clay and make a pot if they wanted to the clay was in such abundance there.

Lewis also advised that creating industrial zoning was part of the town’s updated 5-year plan and that since the land is all owned by the town it would still decide what would go where and that the zoning change will not affect any currently planned expansion of the cemetery.

The council unanimously voted for Lewis to move forward with the rezoning process, which will now go to the Pima Planning and Zoning Board for discussion and recommendation. If it moves forward after that, there will be a public hearing on the proposed zoning change prior to its enactment.