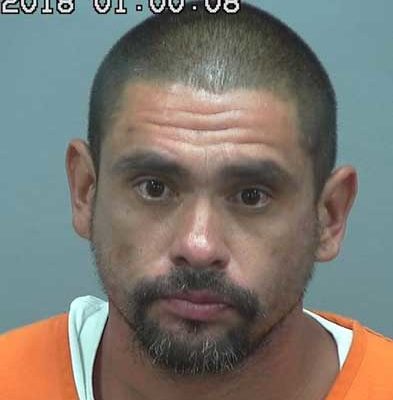 Contributed Photo/Courtesy GCSO: Michael Flores was booked into the jail for arson after allegedly burning down his girlfriend’s residence south of Safford after an argument.

The man reportedly thought his girlfriend was cheating on him

GRAHAM COUNTY – A man who allegedly burned down his girlfriend’s residence in a fit of rage has been arrested.

According to Graham County Sheriff’s Office reports, deputies and the volunteer Safford Fire Department were dispatched to a  residence in the 1800 block of W. 45th Street at 3:15 a.m. on Saturday, June 2, regarding a mobile home that was on fire.

Upon arrival, deputies saw the home was fully engulfed in flames and was in danger of catching a second mobile home on fire that was on the same property roughly 50 feet away. The second mobile home’s occupants – a man on an oxygen machine who was escorted out in a wheelchair, his son, and wife – were all evacuated.

The fire consumed a single-wide mobile home built in 1981, as well as a covered wooden porch built in 1989 and an additional bedroom that was added on approximately in 2013. It also burned a metal storage shed, a wooden shed that housed a well, pump, and laundry facilities, and damaged a mini-van that was parked out back.

The occupants of the burned mobile home – a woman and her four children, ages 16, 11, and two twin 4-year-olds, along with a friend of the 11-year-old – had left the residence earlier the previous night after the victim had an altercation with Flores, who is the father of the twins and also lived at the residence periodically, according to police reports.

Flores allegedly was seen with a cut air compressor hose and an empty Gatorade bottle with the hose entering the gas tank of the minivan prior to the fire. He told deputies that he used the hose to see if there was gas in the van. There was no indication if the vehicle’s gas indicator was malfunctioning.

Around 2:30 a.m. on June 2, Flores shared a bottle of liquor at a neighbor’s house and borrowed his neighbor’s phone to call the victim, according to statements from the neighbor and victim. Flores reportedly told the victim that if she wasn’t home by the time he got back he was going to light the house on fire. He then sent two text messages calling the victim a slang term for a prostitute and threatening to kill her and whoever she was with.

Shortly after Flores left the neighbor’s house, the neighbor reported hearing explosions and then seeing the house on fire.

Deputies located Flores on his father’s property later that morning at about 9:35 a.m., and he agreed to be interviewed by a detective.

Flores admitted he had been fighting with the victim and said she had used a torch lighter to clean a meth pipe before leaving with the children that night. He said they both smoked some meth and then she left with the children while he checked the fuel in the minivan with an air compressor hose. He denied burning the residence down and said his property was inside as well.

Flores was later released and transported to the Mt. Graham Regional Medical Center for treatment for his foot, which he said he injured while gathering scrap metal on his father’s property. He denied burning the residence.

A subsequent investigation by a fire marshal from Globe reported that his dog detected the use of accelerants in the north, add-on bedroom. The fire marshal added that he found a pour pattern in the carpet flooring of the room upon further examination and confirmed the fire was set intentionally with the use of some sort of accelerant.

On Thursday, June 7, Flores was spotted by a Sheriff’s Office investigator working with another man on a farm tractor pulling a tank trailer on Little Hollywood Road. The investigator performed a traffic stop on the tractor and arrested Flores for arson and booked him into the jail.