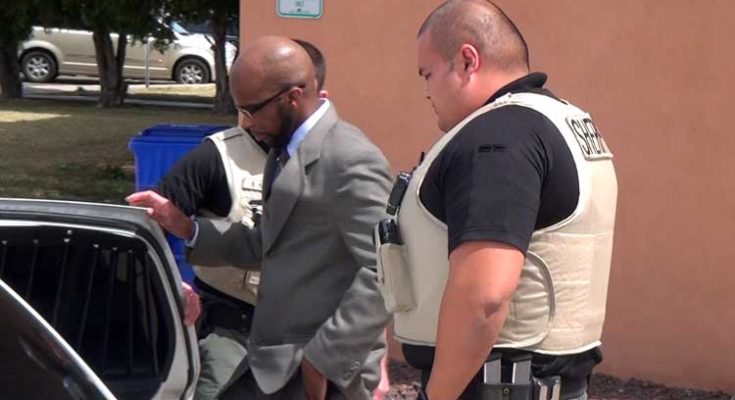 Jon Johnson Photo/Gila Herald: Salih Abdul-Haqq Zaid is led back to the jail by detention transport officers after the jury found him guilty of three aggravating factors Wednesday.

Sentencing set for May 15

SAFFORD – After two-and-a-half weeks, the jury in the Salih Abdul-Haqq Zaid, 40, murder trial completed its job Wednesday just after noon and found three of the prosecution’s seven alleged aggravators were proven.

The proven aggravators were that Zaid used a deadly weapon in the murder (AK-47), that the victim and victim’s family suffered emotional harm, and that Zaid left the scene after fatally shooting Jared Michael Garcia, 35, in the parking lot of the Bull Pen bar in the early morning hours of April 26, 2017.

The jury found that the prosecution did not prove Zaid waited for the victim in the parking lot with the intention to shoot him, and the jury could not come to a unanimous decision on three factors, including whether the defendant failed to render aid to the victim, or if Zaid lied to officers to hinder his own prosecution.

After deliberating for a day-and-a-half, the jury found Zaid guilty of manslaughter Tuesday. The jury, made up of eight women and four men due to the use of an alternate juror, found Zaid not guilty on his first-degree murder charge and they were unable to come to a unanimous decision on the charge of second-degree murder. Zaid was also found guilty of aggravated assault with a  deadly weapon, aggravated assault, endangerment, disorderly conduct with a weapon, and unlawful discharge of a firearm within city limits. All of the charges have been deemed as dangerous. The dangerous designation and addition of aggravating factors allow for a longer sentence.

Once convicted, Zaid’s $1 million bond was removed and he was remanded to the custody of the Graham County Adult Detention Facility to be held without bond. Zaid was already in the jail’s custody as he was not able to post the bond (his attorney provided his courtroom attire of suits and ties) and he will remain in the jail until after sentencing, which he will then be transferred to the Arizona Department of Corrections.

The following day, the prosecution and defense argued over the alleged aggravating factors before sending the jury back in to deliberate them. This time, the deliberations lasted less than an hour. While they are now permitted to speak about the case, the jury declined to comment to the Gila Herald.

Zaid is scheduled to be sentenced May 15 but which judge will do it is still up in the air. The trial judge, Graham County Superior Court Pro Tem Judge D. Corey Sanders, is retiring this month and is not under contract to return to do the sentencing. Judge Sanders said it is a common practice in larger counties such as Maricopa to have a different trial and sentencing judge, but that would be out of the norm for Graham County. No matter who the judge is shouldn’t matter, according to Sanders, because the jury was the one who found the aggravators in the case and whomever the judge is will have all the same relevant information, including a pre-sentence report from Graham County Probation, a mitigation memorandum from the defense, and will hear any testimony from friends and family of Garcia regarding sentencing. Even so, the defense has requested Judge Sanders perform the sentencing.