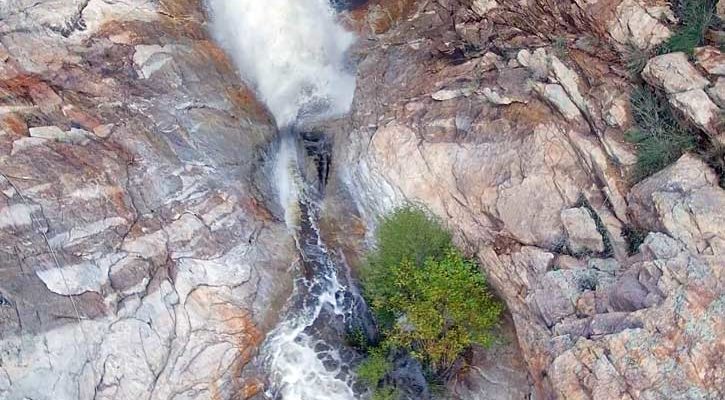 Jon Johnson File Photo/Gila Herald: The water slide area at Frye Mesa can become engorged with runoff after a rain. On Saturday, two hikers were rescued after becoming stranded on the slides.

FRYE MESA – A day of recreating at the Frye Mesa Reservoir took a dangerous turn Saturday as a man and woman had to be rescued from their perilous perch on the steep, slippery rocks of the area’s waterslides.

According to a Graham County Sheriff’s Office report, a 25-year-old man and his 25-year-old female cousin were in the area with family members when they decided to traverse the famed water slides.

After both slid down a couple of the slides, the man proceeded further but soon came upon a large rock obstructing the next slide. Fearful for being injured if he attempted the slide, the man told his cousin not to go any further.

However, both were then essentially stuck in place as neither could climb the slick water slides and were surrounded by cliff walls.

A family member heard their calls for help and, after hiking above them to examine the situation, called for assistance. Teams from Graham County Search and Rescue, the Thatcher Fire Department, and Freeport McMoRan Inc. then responded to the area.

The teams used ropes and rappelled  first to the woman and brought her up without incident.

The rescue of the man was more perilous due to his position, but after some time, the teams managed to reach him and assisted him back up the cliff area as well.

Due to the efficiency of the rescue teams, there were no injuries to the hikers or rescuers.