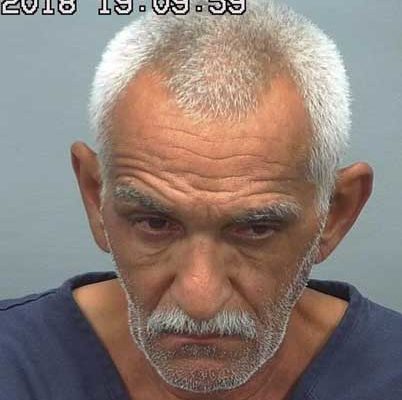 Contributed Photo/Courtesy GCSO: Anthony Ybarra was booked into the jail for shoplifting.

SAFFORD – Serial shoplifter and admitted heroin addict Anthony Ybarra, 53, was booked into the Graham County Adult Detention Facility on Friday after yet another shoplifting incident at Walmart.

Ybarra is the prime suspect in several thefts from the store, with roughly six incidents within the last four months alone. Ybarra allegedly steals items from the store and then sells them to get money for heroin. He told a police officer that he doesn’t sell stolen items to support his drug habit, however, but rather to kill the craving. He also acknowledged his addiction and said he wanted to be assisted in receiving treatment. During Ybarra’s previous interaction with police May 29, his heroin rig was confiscated.

Ybarra was seen on store surveillance footage Thursday at about 11:38 a.m. walking around the store with a cart containing various items. Ybarra was then seen on video picking up a backpack that appeared to have items inside and leaving through the tire section. He did not have the backpack when he entered the store.

Ybarra left the scene on a bicycle, and by the time the police were informed of the theft at about 4 p.m., he was nowhere to be found.

An attempt-to-locate (ATL) was broadcast, and the following day at about 1:45 p.m. Ybarra was seen by an officer in the 1000 block of U.S. Highway 70 and was taken into custody without incident.

After initially denying being in Walmart, Ybarra admitted to stealing a pack of lighters and a small camping tent in the backpack after being told he was caught on video. He said he is homeless and usually gets money from cleaning people’s yards but could not find any yards to clean that day and had to resort to stealing to get money for heroin.

He was then transported to the jail and booked for shoplifting.