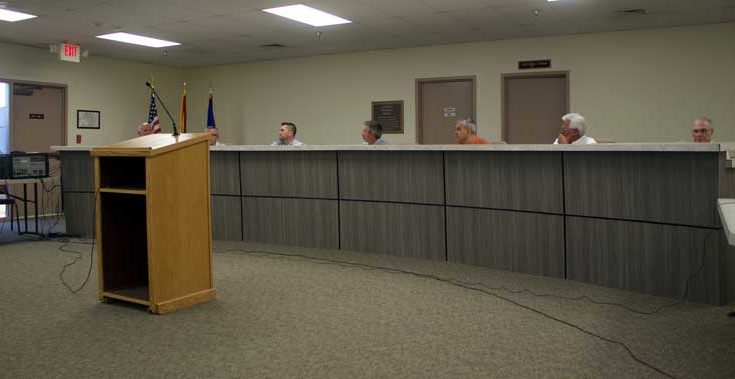 SAFFORD – Those entering the Phelps Dodge Room of the Safford City-Graham County Library for the Safford City Council meeting Monday night were treated to a surprise; the entire council was looking back and welcoming them to the meeting.

The council was seated on their new dais, which is centered in the farthest eastern side – the entryway doors from the parking lot are at the farthest western side – and is centered to face the audience’s chairs, which all face east, with a slight curvature toward the audience. To the north is situated a large screen, which utilizes a projector in the ceiling to show PowerPoint displays, photographs, and other media.

Safford Mayor Jason Kouts said he requested the new dais because the old L-shaped dais set at the far east and south side was awkward and had half the council looking toward the north instead of out toward those in the audience to the west.

“It was time to get the council out of the corner,” Kouts said. “I wanted all of the council to feel in front of the public – more open to the public and to the discussion instead of having their sides to everybody. I wanted to do it, and there was money in the budget to do it.”

The work was all performed in-house by the city’s maintenance crew and the project utilized money left over from the library’s restroom renovation project. That project renovated the library’s men’s and women’s restroom with new tiles on the walls, waterless urinals in the men’s restroom and more.

The sleek, gray Formica of the new dais sets the tone for the council’s interactions with the public. Kouts said his next change for the next meeting will to have Safford Police Chief Joe Brugman upon the wings of the dais looking out at the audience as well.

“I want the chief up on the table,” Kouts said. “I just don’t like his back to the public. We live in a society where you just never know what could happen.”

The council generally meets every second and fourth Monday of the month starting at 6 p.m. for its regular council meetings and work sessions.