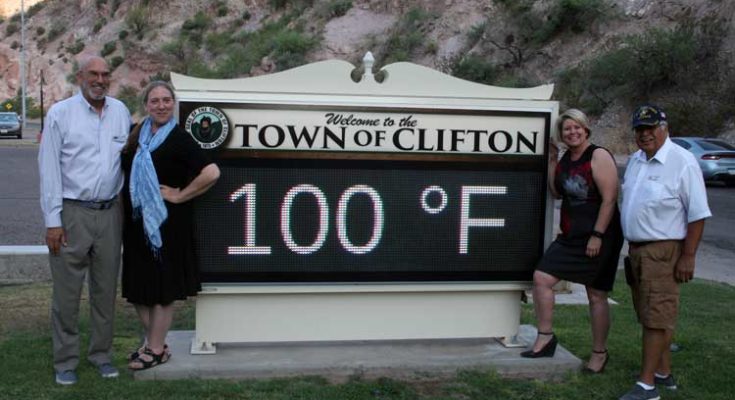 CLIFTON – People passing by the old Clifton Train Depot may have wondered why the four people were doing standing out in the 100-degree temperature Thursday, June 7. It was definitely 100 degrees. At least that is what the marquee in front of the train station read.

The four folks were standing on each side of the marquee while having their picture taken. One might have thought that a heavy rain that fell in Clifton the previous night may have made conditions hot and muggy. No problem. None of the four broke a sweat.

The four are Democratic Party candidates  from Legislative District 14 who are running for the House and Senate in the Arizona State Legislature. They were in Clifton for a forum in which they introduced themselves and gave a quick rundown of where they stand on various issues.

Shelley Renne-Leon and Robert Karp are running for the Arizona State House and will be unopposed in the primary.

Mendy Gomez and Jaime Alvarez will square off in the primary for the single Sate Senate seat. According to Greenlee Democrats County Chair Susan Breen, it is the first time Democrats have fielded a primary fight for the legislature in LD-14 in at least 14 years. The district covers all of Greenlee and Cochise counties, Graham County east of the San Carlos Apache Reservation and Pima County east of Houghton Road.

Both Renne-Leon and Karp are from Sierra Vista. Renne-Leon noted that she is a small business owner who has lived in Arizona for the past 29 years. She said she is running for the House because she feels she has an obligation to become involved and try to change things in Arizona for her recently born first grandchild, as well as others in the upcoming generation.

Karp said he is a retired real estate agent with planning and zoning experience who supports working people. He expressed outrage at a recently passed bill, signed by Governor Doug Ducey, to force people on unemployment to take any job that is offered to them, regardless of the pay or conditions of employment.

Melinda “Mendy” Gomez is a public school teacher in Tucson who resides in Vail. She has been active in the Red for Ed movement as well as other pro-education groups. She expressed concern about health care accessibility in rural Arizona, water issues, and a need for increased help for low-income families in rural Arizona.

Jaime Alvarez is a retired auditor and former Marine who resides in Sierra Vista. Alvarez also ran in 2016 for the State Senate and  came closer to winning in LD-14 than any other state- or district-wide Democratic candidate on the ballot. He was the highest district- or state-wide Democratic vote-getter in Greenlee, getting 45.7 percent of the vote against his Republican opponent.

Alvarez said that during his career as an auditor, his job was to identify problems, find the root cause, and work for solutions. He said he feels those skills will help him be an advocate for his rural constituents, most of whom feel neglected and ignored by their current representatives.

Breen said there was some disappointment at the turnout for the event – about a dozen attended – but there was definitely a positive side.

“The fact that these four candidates drove long distances to attend this event says something about their caring about and commitment to rural Arizona,” Breen said. “Clifton and Greenlee County, as a whole, are very rural. “

“We used to have very strong representation for Greenlee County in the State Legislature. We had people representing us who cared deeply about Greenlee. That, and they were able to reach across the aisle and work with Republicans. That is not what’s happening today. That’s sad. In speaking with the four candidates who were in Clifton I feel assured they will be willing to work with whomever for the benefit of rural Arizona.”