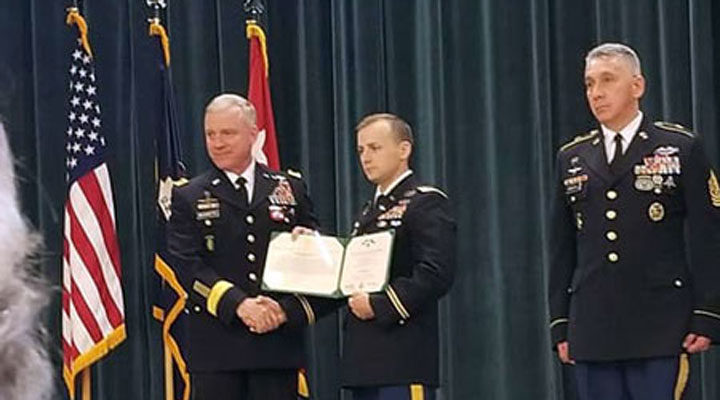 FORT BRAGG, NORTH CAROLINA – Pima native and Pima High School graduate Warrant Officer One Samuel Crockett was awarded the Army’s Distinguished Service Cross at a ceremony in the John F. Kennedy Auditorium on Wednesday, April 24. The award is the second-highest award in the Army and is equivalent to the Navy Cross (for the Navy, Marine Corps, and Coast Guard) and the Air Force Cross (for the Air Force).

“He was airborne EOD when this happened,” Lawrence Crockett said. “He went in before anybody else to make sure it was safe for everybody else. He’s seen a lot of action.”

Samuel Crockett earned the award during his time as a Quick Reaction Force member when he responded to an ongoing assault on a remote compound occupied by enemy insurgents in Afghanistan on Oct. 5, 2013. The following is the details of that response per the Army.

“On Oct. 5, 2013, an assault force of 40 soldiers from the 75th Ranger Regiment was tasked with raiding a Taliban bomb-maker’s compound. As the soldiers approached the compound, described by one special operations official as ‘a suicide vest and improvised explosive device factory,’ a woman wearing a suicide vest emerged from a nearby building and detonated it.

As other Rangers moved in to help the wounded, a series of buried bombs detonated. Four soldiers were killed and 14 others were wounded.

As the number of casualties grew, the ground force commander called for a quick-reaction force of 20 personnel, including Spc. Crockett. Spc. Crockett, an explosive ordnance disposal technician, and his platoon sergeant, Sgt. 1st Class Marodda Tedesco, knowing the existence of potential hazards on the helicopter landing zone, infiltrated the target area in advance of the rest of the quick-reaction force.

The two men cleared an insertion point for the incoming quick-reaction force, working through limited visibility and brown-out conditions.
Spc. Crockett cleared a path for the quick-reaction force to get to the casualty collection point, and he then cleared another to ensure medical personnel could move freely to care for the wounded, according to the narrative. Spc. Crockett then moved on to clear paths for troops who were stopped due to a call to stop all movement, for fear of triggering another explosion.

When another bomb went off as troops tried to recover the remains of another fallen soldier, Spc. Crockett ran toward the wounded troops and began to render first aid. One of the wounded soldiers lost his right leg in the blast and Spc. Crockett applied a tourniquet and single-handedly dragged him to safety.

Spc. Crockett then went back to find another wounded soldier who had been knocked off the cleared path.

Five meters into his deliberate clearance, Spc. Crockett triggered another IED. Despite this near-catastrophe, Spc. Crockett picked a new route and kept moving toward the wounded man. Once he got the wounded soldier to safety and talking with the QRF leader, Spc. Crockett determined he could safely recover the remains of the fallen soldier.

Spc. Crockett had all personnel move a safe distance away and began to clear a path, by hand, to the fallen soldier.

Sec. Crockett told the Stars and Stripes that the IED didn’t explode so he simply continued doing his job.

“But instead of thinking about what could have happened, my immediate next thought was, ‘I’m still alive, and there’s still a job that needs to be done.’ I didn’t dwell on it. I didn’t sit there and contemplate it. I just continued,” Spec. Crockett said.

Completely alone and exposing himself to the known threats in the IED belt, Spc. Crockett utilized a dragline to move (the fallen soldier) back onto a cleared path from where he could safely bring her to the casualty collection point to be prepared for transport.

Spc. Crockett endured the most chaotic circumstances while continuously traversing an ambiguous tactical situation and consistently put himself in the most dangerous positions. Following the final detonation that incapacitated (his platoon sergeant), Crockett took control of the entire objective, managing the movement and clearance of all personnel.

Spc. Crockett ignored the imminent danger and repeatedly elected to enter uncleared areas and in the process recovered 14 total personnel.”

Read an even more detailed account with Samuel Crockett’s thoughts in a Stars and Stripes article here.

“I’m super proud,” Lawrence Crockett said. “I very proud to have a small-town kid do this. This is big. The 3-star general said ‘good soldiers and good people come from small towns where they are raised right.’ I guess we did something right.”

Samuel Crockett was initially given the Silver Star for his heroism, but in 2016 then Defense Secretary Ash Carter ordered his department to launch a review of more than 1,300 valor awards and Crockett was one that was upgraded.

While attending AIT, Samuel Crockett was assessed and selected to the 28th Ordinance Company (Airborne) Fort Bragg, North Carolina. He was deployed five times in support of Operation Enduring Freedom.

In 2017, he was accepted to the Warrant Officer Program and is currently competing the UH-60M Blackhawk Qualification Course, Fort Rucker, Alabama. Crockett is on orders to Fort Carson, Colorado.