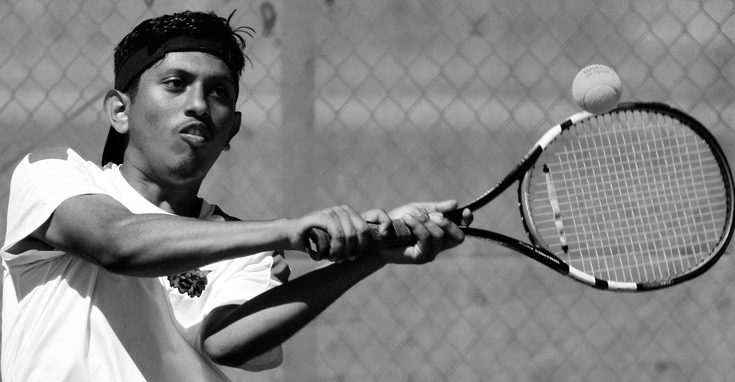 TEMPE – Thatcher sophomore Michael Greer and junior Tyler Bierman will be competing for the Division III state doubles championship in Arizona State University’s Whitman Tennis Center on Monday, April 29, beginning at 5 p.m. The No. 4-ranked Scottsdale Christian duo of freshman Ntal Richardson and senior Josue Cortez will be their opponent.

Thatcher juniors Aaron Hatch – Brandon Udall (1-1) defeated Desert Christian junior Ryan Copley – sophomore Jesse Buell (6-0, 7-6) in the first round before falling 6-2 and 6-1 to Emami – Wendt in the second round.

Benson junior Joseph Lutz – senior Tristan Barker (1-1) advanced through the first round by default of Miami junior Alex Angeles – sophomore Chris Shadle and fell 6-3 and 6-2 to Messing – Rodenberg in the second round.

In singles, the championship match pits No. 1 Tucson The Gregory School junior Wilder Cooke with No. 3 Phoenix Country Day School freshman Ashton Kroeger, at ASU on April 29 with a 5 p.m. start.

Cooke (3-0) defeated Phoenix Veritas Prep sophomore Peter Schillinger (6-1, 7-5) in the second round, Thatcher junior Grant Richardson (6-0, 6-1) in the quarterfinals, and No. 5 Scottsdale Prep senior Adway Gopakumar (6-7, 4-0, retired) in the semifinals.

Kroeger (3-0) made it to the championship match with wins of 6-0 and 6-1 over Phoenix Valley Lutheran senior Cameron Power, 6-2 and 6-1 over Scottsdale Coronado junior Cameron Meinhart in the quarterfinals, and 6-3 and 6-0 over No. 2 Benson sophomore Jordan Merrill in the semifinals.

Merrill ousted Sedona Red Rock senior Kai Zimmerman (6-1 twice) in the second round, advanced through the quarterfinals by default of Tucson Tanque Verde sophomore Luke Laurie, and fell to Kroeger in the semifinals.

Ten of 24 entrants in both singles and doubles were from public schools.

The No. 4 Thatcher boys’ tennis team (16.8362 rating) welcomes No. 5 Chandler Prep (12.9175) for the Division III state quarterfinals Wednesday, May 1. The Eagles ousted No. 13 Chandler Arizona College Prep 5-0 in Thatcher while the Titans edged No. 12 Benson 5-4 in Chandler during the first round April 24.

Other quarterfinal pairings include No. 8 Gilbert Classical at top-ranked Scottsdale Prep, No. 6 Phoenix Country Day at No. 3 Tucson Pusch Ridge Christian, and No. 10 Sahuarita at No. 2 Tucson The Gregory School.

Glendale’s Paseo racquet Center is the site of the semifinals (May 3) and final (May 4).

Results of the other first-round pairings were Scottsdale Prep eliminated No. 16 Morenci 5-1, and it was Gilbert Classical over No. 9 Flagstaff Northland Prep, Pusch Ridge over No. 14 Tombstone, Phoenix Country Day over No. 11 Scottsdale Christian, Sahuarita over No. 7 Tucson Desert Christian, and The Gregory School over No. 15 Anthem Prep by identical 5-0 scores.