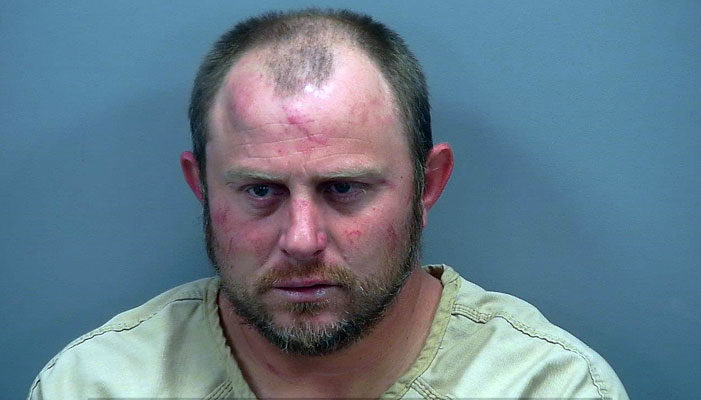 Contributed Photo/Courtesy GCSO: Joshua Stewart, 34, was booked into the jail on a warrant after tussling with officers.

SAFFORD – A man high on methamphetamine was tased, pepper sprayed, and physically struck numerous times during a combative fight with officers Thursday night.

Joshua John Stewart, 34, was arrested and booked on a warrant regarding a petition to revoke his probation stemming from a charge of possession of a dangerous drug (methamphetamine). According to a Safford Police report, while being taken into custody, Stewart also committed violations of resisting arrest and aggravated assault on a police officer.

The incident began when an officer was dispatched at about 7 p.m. to the Tour Rest Motel at 110 W. 5th St. regarding a child welfare check. Graham County Dispatch advised a reporting party was concerned Stewart’s children were in a bad living environment and didn’t have any food. While en route to the motel, the officer was also informed of Stewart’s warrant.

Upon arrival, the officer located Stewart on the west side of the motel and informed him of his warrant. Stewart allegedly refused to be taken into custody on his warrant and insisted on contacting his girlfriend. As the officer attempted to handcuff him, Stewart pulled away and ran off yelling for his girlfriend and threatening the officer, “do not touch me, I will knock you the (expletive deleted) out,” according to the report.

The officer chased Steward down the street and caught up with him in the parking lot of the St. Rose of Lima Catholic Church, where he drew his TASER and warned Stewart it would be used if he failed to comply. Stewart allegedly pushed the officer backward and the officer deployed the TASER, with both barbs finding their mark into Stewart’s chest. However, the TASER did not stop Stewart, and he grabbed the wires and ripped them from the barbs.

Stewart then began to leave the area and the officer pulled out his pepper spray and delivered a burst to Stewart’s face.

The second officer took Stewart to the ground and the initial officer advised that he then delivered knee strikes to Stewart’s body to no effect. The first officer then began punching him in the face. At that time, Stewart complied with the officers’ orders and was placed into handcuffs.

Paramedics from Lifeline Ambulance arrived at the scene and transported Stewart to Mt. Graham Regional Medical Center, where the TASER barbs were removed and he was treated for the pepper spray and medically cleared for jail. At the hospital, Stewart allegedly advised he had last used methamphetamine about four hours prior to his interaction with the police.

Another officer transported Stewart to the jail, where he was booked in on his warrant, and the initial officer completed the welfare check at the motel. The officer reported that the children were with their mother, appeared to be in good condition and that there were groceries in the room.