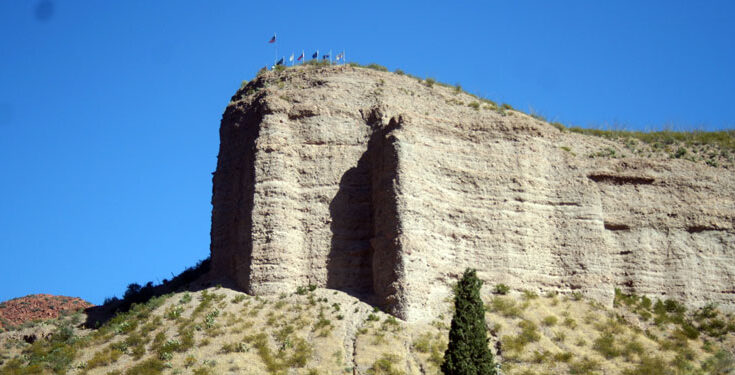 Photo By Walt Mares: The Mares Bluff Veterans Memorial in Clifton is a unique tribute to peace and healing. It honors U.S. Armed Forces combat and non-combat veterans of all branches of military service. More than 2,000 replica dog tags are strung on wire cables in honor of veterans. Visitors are encouraged to ring the bell atop the bluff. The Long Walk to Freedom to reach the bluff’s summit is challenging to some. It represents the effort and sacrifice made by veterans and those currently serving in the military. It will be an ideal activity on Veterans Day, this Friday, Nov. 11.

Thousands honored, there is room for more

CLIFTON – The bell most often rings in the morning, sometimes shortly after daybreak. Its peal can be heard all the way across the San Francisco Canyon in South Clifton.

The bluff’s primary purpose is for healing, said Mares Bluff Committee Chairman Steve Guzzo. “It can be a very spiritual experience for someone to touch a loved one’s dog tag or see that person memorialized on a plaque.”

There are more than 2,000 replica dog tags strung on strong cables atop the bluff. They are replica tags with information about each person. That includes the branch of service and, if requested, the person’s rank while in the military. The tags are made of heavy aluminum. They have names of veterans from all over the U.S. Veterans need not have been in combat to have a tag hung on the memorial.

Guzzo emphasizes the aspect of the memorial as a place for healing. He said there have been several instances when people, veterans, in particular, have articulated just how much healing they have experienced from having been to the memorial.

One instance, in particular, stands out. It was in November when 40 or 50 people were gathered on the bluff for the installation of dog tags. It was a cold day and Korean War veterans were being honored. Among the Korean veterans was Ismael “Smiley” Ortega. He was a somewhat quiet and reserved man but he was also known as being very friendly. He often wore a bright smile. Ortega was a very popular and highly respected member of the Clifton community. (He recently died.)

On that November day, he began speaking about his experiences in Korea. He told of how only he and a comrade were on patrol and were the only ones to survive when his platoon was wiped out in extremely fierce fighting.

As Ortega spoke tears ran down his face. “There wasn’t a dry eye among anyone who was there,” Guzzo recalls.

“He let it all out. He later told me he felt a big weight had taken off of him after 50 years of living with it,” Guzzo said. “He had a lot of psychological anguish and pain from what he experienced a half-century ago. As much as he smiled and the way he always carried himself it was something to hear all he had been holding back all these years.”

He said Ortega thanked him for having a place to unload. And said he felt a sudden peace.

Guzzo also recalled how it had begun snowing when Ortega began speaking. In speaking of his experiences in Korea, Ortega told of the heavy snow that often fell and how it was always extremely cold. Guzzo said it struck him that snow had begun falling at the ceremony. “But the minute Smiley quit speaking, the snow also quit falling.”

“I was amazed how an 82-year-old man climbed up to the bluff and it seemed almost effortless the way he did it.”

The memorial was founded on Dec. 12. 1999. It has moved forward because it was and still is a community effort. “The Bluff and everything about it has been done by the community. That’s one of the beauties of it,” Guzzo said.

Guzzo said the idea came from Vietnam veteran Jimmy Villescas, who suggested following something akin to the Stations of the Cross.

Existing plaques made of plexiglass have been badly damaged, quite possibly by vandals. Some of the supporting posts have been broken. The new plaques will be made of stainless steel. They will be attached to posts set lower than the existing ones to make it more difficult to damage them.

The Long Walk to Freedom initially involves some fairly strenuous effort but after about 100 yards begins leveling out and the walk is much easier. (People with heart conditions or other serious ailments are discouraged from climbing the trail.)

Guzzo has been approached about making the trailhead easier to climb. “That goes against the whole purpose of it because it takes effort to walk it. That’s why it’s called The Long Walk to Freedom. Earning and protecting our freedom has never been easy.”

The trailhead is located along Ward’s Canyon Road, about a half-mile from the U.S. 191 turnoff in South Clifton.

There is currently work ongoing to improve the trailhead site. Vietnam veterans Joe Nafarrate and Gary Holt are constructing a heavy-duty ramada. Steel beams will support the structure. It will not be something that will easily collapse even under strong wind gusts.

On Nov. 10 they were working on building it. It was an impressive site as the two men dealt with heavy steel beams. They will undoubtedly be working on it for several days. A concrete floor for the ramada has already been constructed.

Holt is a precision welder with several years of experience.

An example of his work is the new Mares Bluff metal sign, painted red, white, and blue, that adorns the trailhead area.

Four acres of land at the trailhead have been donated via a 100-year deed by Freeport McMoran, Inc. FMI’s Bill Cuthbertson followed through on all the necessary paperwork to make that possible. Bluff representatives had made requests in the three years prior.

Meanwhile, FMI’s Bobby Pollock made equipment available, such as a loader and large dump trucks to provide 450 tons of gravel to cover the area.

Along with the primary purpose of healing, the bluff committee’s goal is for it to be an educational experience. “The bluff offers a lot to learn about history¸ local and national. Yeah, there is a whole lot to learn,” Guzzo said.

How well-known is the bluff memorial? Guzzo said an average of more than 1,500 people a year sign the register sheltered in a wooden box at the top of the bluff. Figure on the number of people who do not sign it and that adds up to a whole lot more.

He said that from the time it was founded in December 1999 to the present day, about 50,000 people have made the Long Walk To Freedom.

Guzzo added that many people make the trek on weekends. In the summer the walk is best made early in the morning. But as the weather cools, any time of day is fine for a time of good exercise as well as spiritual healing.