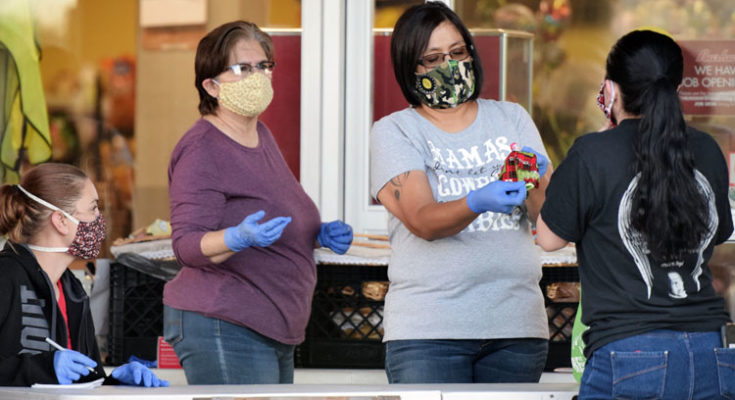 Raymundo Frasquillo File Photo/Gila Herald: Volunteers hand out masks at an event in Morenci. The Greenlee BOS extended its mask mandate to Jan. 23, 2021, during an emergency meeting Friday.

Was due to expire Saturday, Dec. 12

The Greenlee County Board of Supervisors at a special Friday, Dec. 11 meeting extended the timeline of an ordinance requiring people in public places to wear protective face masks. The measure is being taken in light of the deadly Covid-19 global pandemic.

The pandemic first surfaced in the U.S. around February and has killed more than a quarter-million Americans.

As was the case in June when the county ordinance was first passed, the three-member board’s vote to approve the ordinance was not unanimous.

The vote again was was 2-1 with supervisors David Gomez, District 1-Clifton and Ron Campbell, District 2-Morenci, voting in the affirmative. Richard Lunt, District 3-Duncan, voted in the negative saying he did not want to impose on the Town of Duncan’s council vote to not require people to wear face masks in public places.

Lunt repeated what he said in an interview prior to the June meeting. He said that to him the matter comes down to individual choice and freedom. “If you make good choices, that allows you to have freedom. If you make bad choices then that freedom can be lost,” he said.

Gomez and Campbell made impassioned remarks about the need to keep the ordinance in place.

Supervisor Campbell stated said that his job as a supervisor was to protect public safety. “What if we left all laws to choice,” he asked. He put forth a motion to reinstate the mask ordinance to be reconsidered in January. Supervisor Gomez joined by phone seconded Campbell’s motion, and said he agreed with everything he had said and voted “aye”. Supervisor Lunt expressed concern that the issue had become politicized. He said a person “ought” to wear a mask to protect others. He used an analogy of leading a horse to water but not being able to make him drink. He again voted “nay” on the ordinance. Supervisor Campbell responded that he felt his position as a supervisor was to look out for the safety of all his constituents, not just the ones who agreed with him.

Members of the public who spoke included Clifton Mayor Luis Montoya, who thanked the county for working with the town of Clifton. He stated that due to the spike in cases, the town will not be rescinding its municipal mask ordinance any time in the near future.

In response to Susan Breen, who spoke as a member of the public questioning how the Greenlee County Sheriff’s Office could refuse to enforce the ordinance, Sheriff Tim Sumner spoke of a hypothetical scenario where mask-wearing might be prohibited, which he would also not enforce.  Sumner said the wearing of masks should be “the people’s choice.” He said that his job is to “protect citizens from government”, adding that the CDC does not recommend wearing masks (not true). Sumner added that the decision to wear a mask or not “comes down to people’s choices” and that he doesn’t have control over that. He said he didn’t feel America’s “ Constitutional processes were being followed” with face coverings being mandated in public places, and that an ordinance is not the same as a law. Sumner went on to say that everyone knew the ordinance would be passed and that the special meeting was just “a dog and pony show.” He also said the board meeting was just “a rubber stamp.”

Erika Carrasco spoke as a member of the public and thanked the sheriff’s office for recently providing masks for deputies. However, she stated she felt it was misleading for the sheriff to equate the requiring of face coverings with a scenario in which face coverings were not allowed in public places, which she felt would never happen.  Carrasco went on to take issue with the sheriff’s assertion that the mask ordinance violated the U.S. Constitution, pointing out that people have a “Constitutional right to live freely and safely.”

Amanda Gray, a quality control officer at Gila Health Resources, said she does contact tracing for Freeport McMoRan Inc. and said the job has become overwhelming due to the skyrocketing numbers of infections. She added that 50 percent of people who are infected do not show symptoms. Therefore, a young person may have the virus and not know it, but go on to infect older people with whom they have a contact who then may become very sick and even die. She opined that unfortunately there is often a difference between recommending what people should do on their own and mandating what they are required to do. Without a mask mandate, she felt the numbers she has to deal with daily would be even worse.

The Greenlee County Health Department reported eight new positive tests for COVID-19 on Thursday, putting its total for the pandemic to 321.

As of Thursday, the health department has tested 3,134 people, with 2,813 negative results, and 321 positives. The county currently lists 160 active cases, with 158 recovered and three deaths.