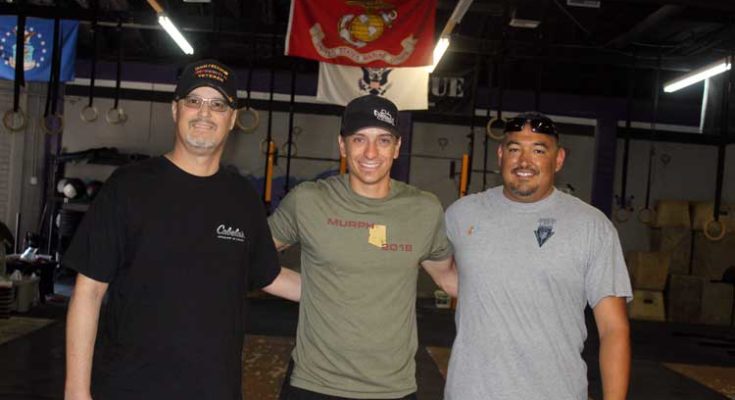 Lt. Murphy was killed in action in Afghanistan in 2005. One of his favorite workouts, now dubbed the Murph, was to run 1 mile followed by 100 pull-ups, 200 pushups, and 300 squats followed by another mile run to end it. He also liked to wear body armor or a 20-pound vest during the workout. More than 60 participants gathered to do the Murph on Monday and its adjoining raffle. The event brought in $534 from Gila Valley Crossfit, and an additional $204 from an event by Nemesis Crossfit on Saturday.

Vigus is a 47-year-old father of two who was deployed to Kuwait in Operation Desert Fox in December 1998 as part of the Marines. After 10 years in the Marine Corps, he joined the National Guard and was deployed to Iraq during 2004-05 for Operation Iraqi Freedom. He currently works at FCI-Safford.

Vigus is battling leukemia and fought off sepsis, pneumonia, heart issues and other medical problems that came about during his treatment.

Aguilar is a 40-year-old father of three who was raised in Safford. He was deployed to the Middle East as a Marine and has spent the last 16 years working at FCI-Safford. He also serves as an assistant football coach at Safford Middle School.

Vigus and Aguilar spoke with the Gila Herald about the event and expressed their gratitude.

“It’s very well appreciated, and I want to thank everybody,” Vigus said. “It’s awesome to see these guys working out and doing this competition.”

“It was just awesome to see the community come together,” Aguilar said. “I’m overwhelmed, and I can’t say thank you enough to both gyms that put on this event . . . If you ask me, I think we live in the best community in the nation.”

Some of the raffle items included a signed poster by UFC fighter Justin “The Highlight” Gaethje, a free month at Gila Valley Crossfit, yoga lessons at Creative Flow Studios and more.

“This is what we do,” Davis said. “We love doing it. We get a whole bunch of people here to work out and it’s a good community-type deal.”

For more information on Gila Valley Crossfit visit its Facebook page by clicking on the link.