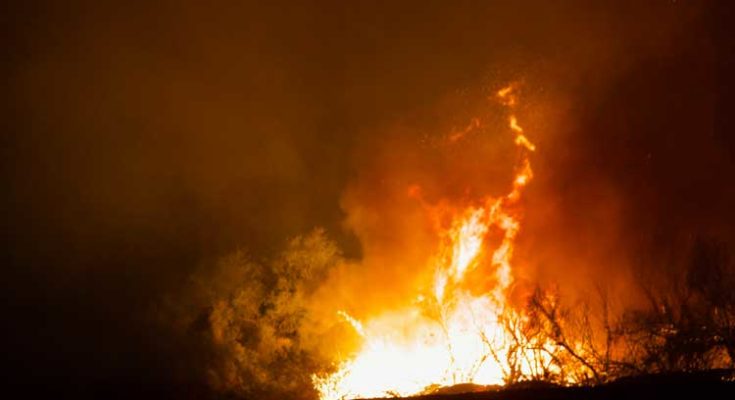 Photo By Scottie Walker: A wildland fire burns along the Gila River in Safford late Monday night into Tuesday morning.

SAFFORD – A wildland fire began burning along the Gila River in Safford on Monday night.

The volunteer Safford Fire Department was dispatched at around 9:15 p.m. to the fire, which appeared to start near the riverbed in the area of 20th Avenue. By 10 p.m. the orange glow of the fire could be seen from Pima to Solomon as it spread out over the length of roughly 2.5 miles as it headed east.

What started the fire is unknown, but is likely to be human-caused.

Aided by high winds and extremely dry conditions, the fire quickly overtook the firefighters, and they fell back to a defensive position to the east along a farm road just south of the Safford Wastewater Treatment Facility. According to a firefighter at the scene, they were staged there to help protect the utility poles in the area. At about 11 p.m., utility workers arrived and cut the power to the poles, which only caused a power disruption to a farm pump, according to the workers. They advised that if the fire spread further south they might have to cut more power that could affect residents.

However, when the Gila Herald pulled out of the area at about 11:15 p.m., there were no threats to residences in the area, but the fire had spread to roughly one mile west of 8th Avenue. Additionally, there is a freshly planted cotton field that was near the fire, but the Gila Herald could not confirm if any of it had been damaged.

As of 11:45 p.m. when this was first posted, Safford Fire is still on the scene as well as at least one representative from the Bureau of Land Management.