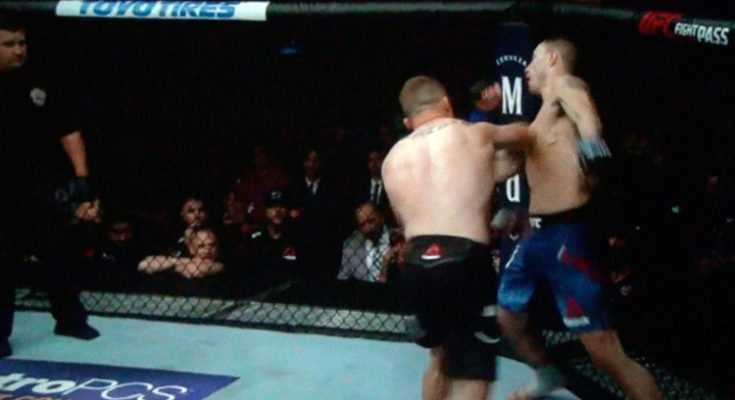 Safford native Justin “The Highlight” Gaethje (2-2 UFC, 19-2 overall) said he wanted No. 10-ranked James “The Texecutioner” Vick (9-2 UFC, 13-2 overall) to go at least three of the scheduled five rounds at UFC Fight Night 135 in Lincoln, Nebraska on Friday night, but Vick couldn’t even make it through 90 seconds.

After having three epic battles in his first three fights in the UFC, the No. 7-ranked Gaethje ended his fourth fight so fast that people didn’t even have time to get their popcorn ready.

Not since Craig knocked out Deebo in the movie “Friday” has someone been knocked out cold so quickly and in front of such a large audience. When Gaethje landed his punch, Vick went straight down to the canvas and referee Kevin Macdonald immediately jumped in to stop the fight. Gaethje then did his customary victory flip off the top of the cage and then left the octagon to celebrate with his family before flipping back inside.

Vick, who previously said Gaethje was the Homer Simpson of the UFC alluding to when Homer became a boxer who won his fights by letting his opponents tire by beating on him, came out keeping Gaethje at bay at first with some long kicks. But as soon as Gaethje got inside close to Vick, he landed a big right hand 86 seconds into the bout that knocked Vick out cold.

The pride of Safford, Gaethje was magnanimous after his victory but also advised the audience on how he perceives insults.

“This game is not forgiving man,” Gaethje said. “That could easily be me right now. It’s what we do. I am the least fake person in this sport. I take everything personal. I took everything he said personal, and I’m glad I put him to sleep.”

“It’s hard to get hit when you’re trying to move backward. That’s why I take punches – force with force. You can talk all the crap you want about me but I see punches, I take them on the forehead and I’m not going to take them going backward. Who’s next?”

Vick won his previous bout in February against Francisco Trinaldo, while Gaethje came up short against Dustin Poirier in April.

Gaethje had lost his previous two matches in the UFC to Dustin Poirier and Eddie Alvarez after being victorious in his debut against Michael Johnson, another man who continuously insulted Gaethje before the match. Even though he lost those two fights, he has been the fight to watch at every event he has been a part of, earning Gaethje another trip to the Main Card. Additionally, he earned four post-fight bonuses in those three events. On Friday, Gaethje earned an additional $50,000 for having the performance of the night yet again.

He made his MMA debut Aug. 20, 2011, with a knockout slam against Kevin Croom and amassed a 7-0 amateur record. He signed with the WSOF on Jan. 22, 2013, and quickly rose to become its inaugural lightweight champion with a first-round knockout of Richard Patishnock in January 2014. Gaethje then successfully defended his title five times, as well as a non-title defense because his opponent didn’t make weight and finished with a 10-0 record.

When asked who he wanted to fight next, Gaethje called out Tony Ferguson to step up and meet him for battle.