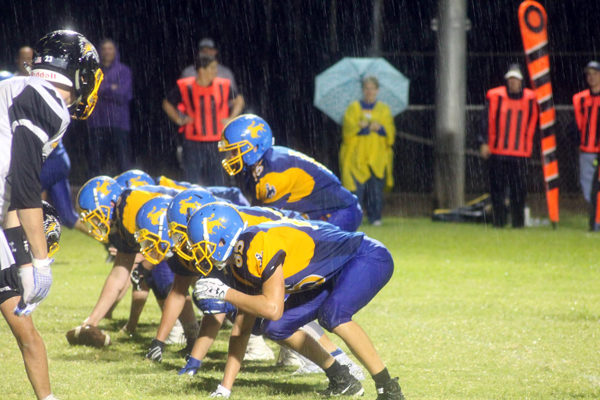 Photo By Scott Bennett: The Pima Roughriders had a hard-fought game in the rain against the Arizona Lutheran Academy Coyotes but came up short, 24-6.

PIMA – In Pima on Friday night, the Coyotes of Arizona Lutheran Academy (ALA) weathered the storm better than the home squad as there appeared to be no mudders in the Roughrider stable.

The Coyotes used big passing plays out of its bunch formation to score or set up scores on its way to an easy 24-6 victory.

The rain fell slightly but steadily throughout the contest and hid the tears on the faces of players and fans as John Bryant’s return to Pima and his first foray into 11-man football came up short.

The Roughriders’ offense was derailed by a phantom false start call on their first possession, but the defense stepped up and created two turnovers on fumbles on the ensuing two offensive possessions for the Coyotes. However, the offense continued to stumble and punted twice and turned the ball over on downs twice in just the first quarter alone.

“I felt like our offense just totally sputtered,” Bryant said. “I think our defense played good enough to win the game. In fact, I felt that we dominated the first part of the game defensively. Then, we just didn’t do anything offensively.”

After being stifled by the Pima defense, late in the first quarter Arizona Lutheran got the ball rolling by passing out of a bunch formation that is generally used for a run. First-year varsity quarterback Tyson Biciolis got rid of the ball just before being creamed by Roughrider Trae Nelson and Coyote Jamie Heyn was all alone to receive the catch. Heyn then went untouched 54 yards for the score. The 2-point conversion was stopped by the Roughriders, but the Coyotes had struck first and went up 6-0.

“There were just a few things that we saw in how they were lining up, so we kind of thought we could get a quick hitter a few times on the pass, which kind of opened things up for us,” ALA head coach Dave Peter said. “They did a good job defensively of trying to bottle us up.”

“I thought he did an excellent job,” he said. “He made some good decisions when to run with the ball and threw it quick, which is really what you need to do in our offense.”

The Coyotes’ balanced attack saw them put up 180 yards through the air and 209 yards on the ground for the game.

Pima turned the ball over three consecutive times in the second quarter on a fumble and two times on downs. Conversely, after turning the ball over on downs in the red zone, the Coyotes ended the half with two straight touchdowns.

Brandon Garcia scored on a 30-yard run with 5:59 left in the half and then the Coyotes were aided by an egregious pass interference call that extended their following drive. That drive ended with a fumble into the end zone, which the Coyotes recovered for the touchdown and went up 18-0 just before the half.

ALA continued its winning ways on its first drive of the second half spurred by a 50-yard pass play to Garcia, who finished the drive with a touchdown run.

Pima finally got some offense in the third quarter as Brennon Hughes hit Josh Whitaker on a 25-yard pass to the 40-yard line. Hughes and Kaleb Blair traded spots at the quarterback position all night in the same vein the University of Arizona did with Ortege Jenkins and Keith Smith in 1998.

The Riders got their only score of the night when Whitaker punched it in from 4 yards out late in the third quarter. Neither team would score again, and the Coyotes left Edd Hubbard Field with the victory, 24-6.

The Roughriders were without sophomore standout Edward Ibeh-Young, who missed the game with an ankle injury. Bryant labeled Young as a playmaker receiver and said the team will benefit when he returns to the field, whether it be next Friday or that game after that.

“We missed him, but still, we should have won the game,” Bryant said.

“He is still slightly limping on it (his ankle), so I’m not going to play him until he is well.”

Thatcher (2-0) had another lackluster first half followed by a big second half and came back from being down 10-6 at halftime to beat American Leadership Academy – Queen Creek, 30-10. The Eagles will next host the Show Low Cougars on Friday, Aug. 31 at 7 p.m.

Morenci (1-1) bounced back from its opening season loss to Thatcher and put a hurting on the Santa Rita Eagles, 66-0. The Wildcats will next travel to take on the Benson Bobcats on Friday, Aug. 31 at 7 p.m.

Duncan (1-1) went to Big Sky country in Flagstaff and blew out Fredonia, 52-8. The Wildkats will next travel to Bowie to take on the San Simon Cougars on Friday, Aug. 31 at 7 p.m.

Safford had a bye.