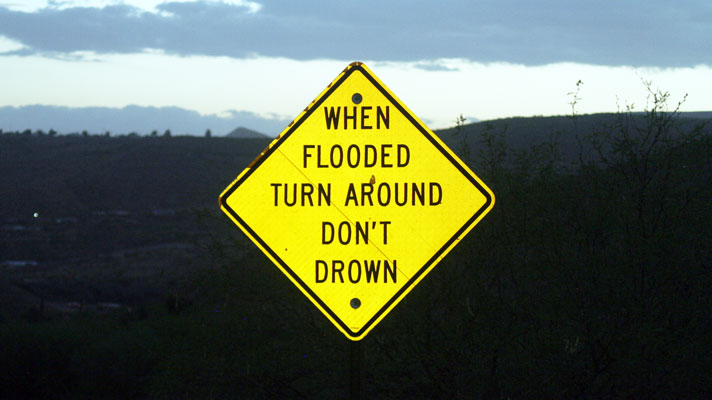 Walt Mares Photo/Gila Herald: A sign on Ward’s Canyon Road in Clifton reads “Turn Around Don’t Drown” warning motorists not to enter a dip in the road when it is flooded. The U.S. Forest Service has issued a warning about the possibility of flash flooding in the Clifton area resulting from the Bringham Fire burning north of Morenci.

Dry, dry, dry. There have only been a smattering of rainfall in Greenlee County so far this year. So why is there the potential for flash flooding in Clifton?

Part of the answer is that Clifton is prone to flooding. The rest can be put off on the Bringham Fire. It has been burning since June 6 about 22 miles north of Morenci in the Apache-Sitgreaves National Forest.

According to a July 1 Forest Service news release, steady monsoon showers will soon blanket the Bringham Fire burned area, potentially contributing to flash flooding along the Blue and San Francisco rivers near Clifton.

Flood prone Clifton is located in the narrow San Francisco River Canyon. The Frisco is one of the eight fastest running rivers in North America, according to the U.S. Geological Survey. It is also one of only four rivers in Arizona that runs year-round.

At times, the river flows like nothing bigger than a creek. That can change rapidly when the rains come. It can become fast running and deep and very dangerous, so can the dips of roads in certain parts of town.

It is not always during the monsoons that the river can swell and run bank-to-bank. But under current drought conditions, the possibility of flash flooding is a definite threat.

He said that a Forest Service BAER team is currently evaluating the potential for post-fire effects from the Bringham Fire. As of July 1, the fire has burned 23,142 acres and is about 40 percent contained. It was caused by lightning and hs mostly been burning short grass, timber, and brush.

Smoke from the fire at times has drifted heavily into Clifton and Morenci, creating hazy conditions and the strong smell of smoke.

Brown said areas downstream of the Bringham Fire burned area, which recreationists may use, are now more vulnerable to flash flooding and debris flows—ash, sand, silt, rocks, and woody material. Rainfall-runoff normally absorbed by soil and vegetation may run off extremely quickly in a burned area because the soil is damaged, and the vegetation no longer exists.

Brown warned that severely burned soils can be as water repellent as pavement. The power of moving water is deceptive and deadly.  Recreationists must be prepared to move to higher ground when chances of rain exist, Brown said. During the monsoon season, these three simple rhymes may help save your life:

In the immediate Clifton area and throughout Greenlee County there are signs warning of the potential of flash flooding. The most vulnerable are in Clifton is the Ward’s Canyon Road. Within the last five years, major improvements were done near the canyon’s confluence with the San Francisco most of that was done to prevent part of the road from being washed out as it had so often in the past.

Less than a mile above the confluence there is a large dip in the road which tells motorists to stay out of the dip when water is running heavily through it.