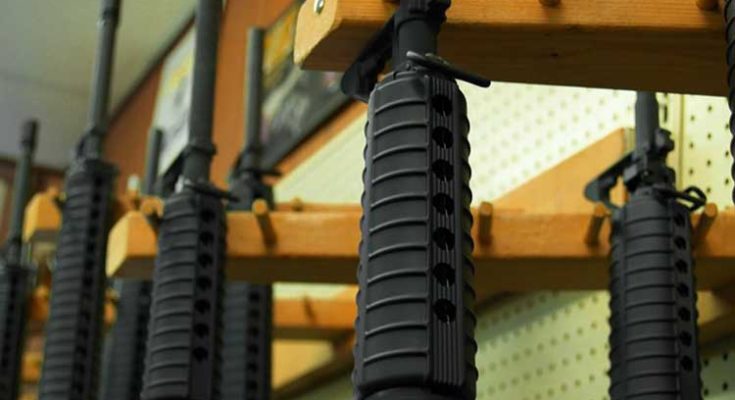 Photo By Keary O.: Sen. Jeff Flake, R-Arizona, wants to tighten the law that lets 18-year-olds buy rifles, like the AR-15 used in the Florida school shooting, a proposal that advocates say goes too far, or not far enough.

WASHINGTON D.C. – When Sen. Jeff Flake said he would work to restrict access to AR-15s for those under 21, he somehow managed to unite pro-gun advocates and gun control groups who think little of his response to the Florida high school shooting.

The Arizona Republican tweeted this week that he will work with Sen. Dianne Feinstein, D-California, on legislation to raise the age to buy a gun to 21, the same age required for a handgun purchase. Flake noted that “a kid too young (to) buy a handgun should be too young to buy an #AR15.”

It is just one of many proposals that have come in response to the Valentine’s Day shooting at Marjory Stoneman Douglas High School in Parkland, Florida, where a 19-year-old gunman used an AR-15 to kill 17 and injure 14 others.

Those proposals range from toughening gun licensing so that potential buyers would have to undergo mental health assessments to arming specially trained teachers to act as a last line of defense in case of a school shooting.

While Flake’s tweet focused on AR-15, a semiautomatic rifle, Feinstein said in a statement last week that her bill would “require all firearms purchases from gun dealers be restricted to individuals who are at least 21 years old.”

Flake’s office did not discuss specifics of the proposal but said Friday that the senator is “joining Sen. Feinstein and working on bill language.”

Arizona advocates on both sides of the debate had plenty to say.

Charles Heller, communications director and co-founder of the Arizona Citizens Defense League, called the Flake-Feinstein proposal an “idiot’s errand” and a betrayal by Flake that proves he “hates freedom” like others who endorse gun control.

Heller called AR-15s an emblem that critics latch on to after mass shootings like the one in Parkland.

“The mechanism of these hurtful incidents is not the cause,” Heller said. Instead of focusing on the guns, which are “just a piece of equipment,” he said lawmakers look at aiding those with mental illness and making schools tougher targets.

On the other side, one gun-control advocate said she appreciates what the senators are doing but feels the regulation will be a lot of show with little results.

“It’s nice that they’re making an effort,” said Geraldine Hills, founder and president of Arizonans for Gun Safety, before asking, “What difference will it make?”

She pointed out that the shooters in the Las Vegas and Aurora, Colorado, attacks were both over 21 and would have been completely unaffected by any change this bill would make. Additionally, if the Flake-Feinstein bill mirrors current handgun laws, it would only prohibit rifle sales to those under 21 from federally licensed dealers.

“Without universal background checks, there (are) loopholes everywhere,” Hills said.

In Arizona, anyone over age 18 can buy a handgun through a private sale, which does not require any type of background check. Presumably, this would be the same for rifles if the new bill becomes law.

President Donald Trump in a tweet supported raising the age limit to purchase a firearm, as well as extending background checks to be required even in private sales.

“I will be strongly pushing Comprehensive Background Checks with an emphasis on Mental Health. Raise (the) age to 21 and end sale of Bump Stocks,” a device that can increase the rate of fire of a semiautomatic rifle, the president said in his tweet.

Heller believes that Flake-Feinstein bill would do very little to actually take guns out of the hands of anyone under 21.

“They can make all the laws they want … but anyone who owns one privately can sell it to anybody else,” he said, adding that any new firearms regulations would not prevent criminals or the mentally ill from committing crimes with guns.

“Fiddling with guns won’t change anything, all it will do is punish the innocent for the acts of the guilty,” Heller said.

But Hills, pointing to the emotional impact of live tweeting by students during the attack at Stoneman Douglas, thinks the country could be at the “tipping point” ushering in more gun regulations.

“This is a milestone moment we will look back on this and say, ‘Things changed,’” she said. “We have to, we saw it happen in real time.”