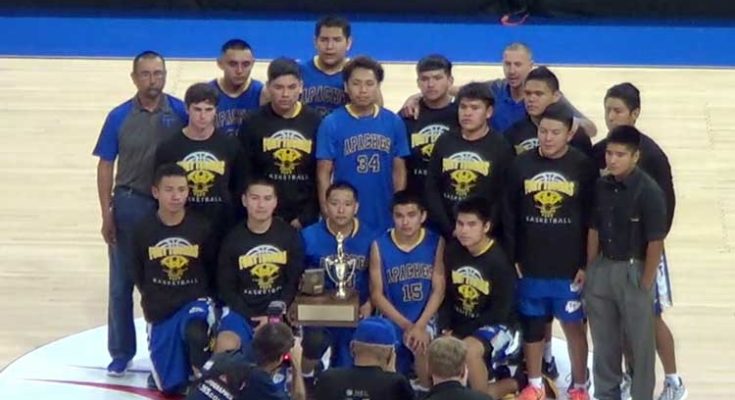 Fort Thomas finished its season as the 1A Boys Basketball State Runner-ups after losing to The Gregory School, 65-46.

The Apaches faced an uphill battle all day as they never led in the contest. While they may have lost the game, the Apaches showed their class by allowing the Hawks’ mentally disabled player, Conner Heros, to score with little time left on the clock and the game well out of hand.

Junior guard Tomari Harris opened the scoring for the Hawks by scoring their first 8 points on a rebound putback and two 3-pointers. Harris’ sky-high play ended providing him with 22 points on the night.

Sophomore guard Brad Johnson hit an early 3-pointer for Fort Thomas, but the Apaches missed several shots in the lane and were down 8-3 with 3 minutes to play in the first. That’s when sophomore guard Skylar Kindelay made a nice drive and finished at the bucket.

The Hawks’ senior guard Addison Mort then made his presence known by hitting a 3 and then taking a steal coast-to-coast for a fast-break layup. Mort would hit another 3 from beyond NBA range a couple of minutes later, and the Hawks doubled up the Apaches at the end of the first period, 18-9, behind 8 points each from Tomari Harris and Addison Mort.

The Apaches started to get it going down low in the second period as 6’5” sophomore Latrell Titla and senior Kobe Talgo scored in the paint.

The pace remained fast as both teams pushed the ball up and down the court but the shots stopped falling. With 2:10 remaining in the second period, Addison Mort ran through a screen and was called for his third personal foul, forcing his coach to pull him for the rest of the half.

With Addison Mort out, the Hawks looked out of sync and the Apaches took advantage by going on a 7-4 run that was spurred by a defensive block by Titla and a steal by sophomore guard Malachi Rogers. After the steal, the Apaches found Rogers in the corner for 3 and the crowd erupted as the bucket brought the Apaches within 4, 25-21. Titla exploited his size down low and finished with 9 points and eight rebounds.

The Gregory School held for the last shot, however, and somehow Tomari Harris managed to get his floater in the lane to go just before the buzzer. Tomari Harris finished with 14 points in the half and had his team up 27-21 as they headed into the locker room.

The tide turned back the Hawks’ way in the third period as a resurgent Addison Mort led the way with 8 points to increase the lead to 15, 42-27, with 1:42 left in the period. Addison finished with a game-high 24 points.

The Hawks ended up outscoring the Apaches 17-9 in the period and enjoyed a 44-30 lead heading into the fourth period.

The Apaches got the lead down to 8 behind a big 3-pointer by Kindelay, and senior Kobe Talgo led the Apaches with 17 points and eight rebounds but it was a little too late for the comeback.