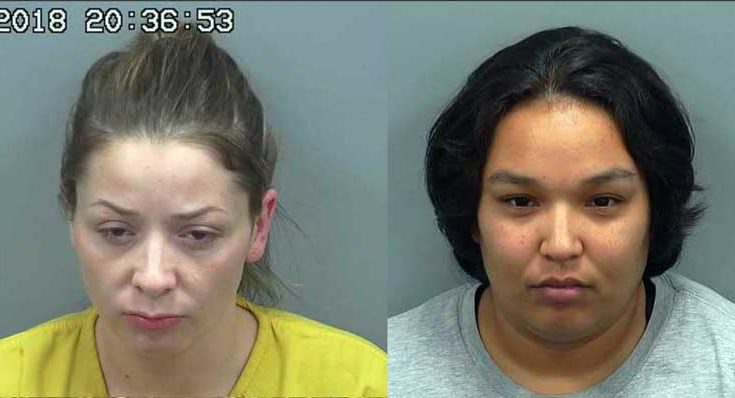 Contributed Photo/Courtesy GCSO: Lacey Samaniego, left, and Amanda Young were both charged with assault after fighting each other while incarcerated in the Graham County jail.

GRAHAM COUNTY – Most people in jail are awaiting a conclusion to crimes they have been accused of committing. But sometimes, additional crimes are committed while incarcerated.

Two female inmates at the Graham County Adult Detention Facility were involved in a fight while inside the jail Monday, July 10.

A Graham County Sheriff’s Office deputy was dispatched at about 6:19 p.m. to the jail at 600 W. Canal Road regarding a fight between Lacey Samaniego, 28, and Amanda Young, 24.

A detention officer showed the deputy a video of the incident, in which Samaniego was shown reaching for a cup in front of Young, who was seated. Samaniego then pushes young with her shoulder and elbow.

As both subjects then began to swing at each other, Young got the best of it by striking Samaniego repeatedly in her face. Young then grabbed Samaniego and threw her to the ground.

In the video, Young is seen walking away and if she had left it at that she would have been justified in the defense of herself, according to the deputy. However, Young is then shown turning back toward Samaniego as she lie on the ground and attempting to strike her again.

Young asserted that she was the one who had been assaulted and requested Samaniego be charged. Samaniego, who let the fight with bruises around her eye and cheekbone, said she didn’t wish to pursue charges.

Both women were given citations for assault and were handed back over to the detention officers. Young was released the next day on her own recognizance and the Graham County Attorney’s Office filed an assault charge against her the same day.