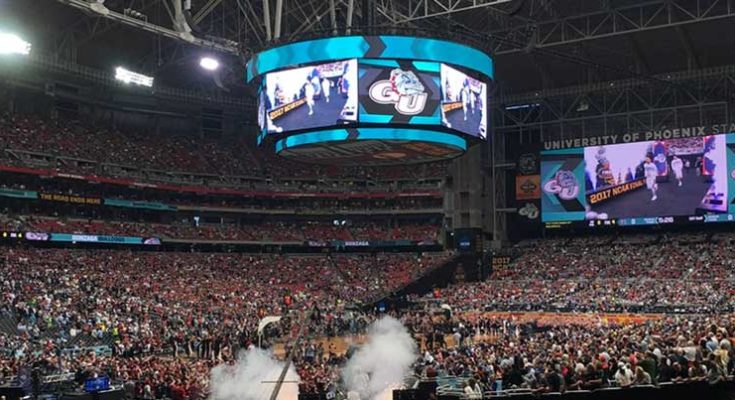 Cronkite News Photo: Just one year after hosting the 2017 Final Four, Glendale was awarded the 2024 game over cities including Los Angeles and Dallas.

PHOENIX — Just a year after hosting its first Final Four, Glendale and Phoenix have landed the mega-event again.

Like many across the country, Debbie Johnson was glued to her screen waiting for the official statement. The Director of Arizona’s Office of Tourism and the co-chair of the Phoenix Local Organizing Committee was just five days removed from standing in front of NCAA officials in Boston delivering Phoenix’s final presentation.

This go-round, they also had experience. Kinks that needed to be worked out during the preparation for ‘17 have been resolved. The group found solutions for how to maneuver people west from Phoenix and Scottsdale to the University of Phoenix Stadium in Glendale. They secured fundraising and saw a volunteer turnout that was “more than any other community out there,” Johnson said.

Monday solidified Phoenix, and Arizona as a whole, as perhaps the premier mega-event destination. The NCAA passed on Los Angeles, Dallas, and Detroit in favor of the desert, a statement that emphasizes the community engagement and cooperation Arizona’s cities have brought.

It’s convention and visitors bureaus work together in an unparalleled way. They get together on a regular basis to discuss the specifics of each mega-event bid, sharing resources and knowledge in a collective way that countless other cities fail to do.

“Very few destinations have as many cities involved — perhaps Los Angeles might be the only other — but a frequent big event city … we’re probably the most unique in terms of having myriad municipalities and different CVBs,” President and CEO of Visit Phoenix Steve Moore said.

“We do not represent our bids as saying, ‘This is where this shall occur, or that shall occur.’ We present a pallet of the entire destination and allow, and encourage, the NCAA or the NFL or the College Football Playoff, or whomever to choose where they want to be.”

The results have been significant. After Monday’s announcement, Phoenix’s mega-event run looks like a dynasty.

Including the 2023 Super Bowl, which Arizona landed back in May, the 2024 Final Four will be the eighth mega-event (a saying that mainly encompasses the Super Bowl, the college football national championship and Final Four) for Arizona since University of Phoenix Stadium opened in 2006.

In that same span, and including all announced mega-event host sites, no other destination has more than six.

“The coordinated efforts of these different stakeholders is unique to Arizona and provides us with a competitive advantage in our efforts to attract major events to the Valley,” Glendale city manager Kevin Phelps said in a statement.

Phelps and Phoenix city manager Ed Zuercher were both a part of Phoenix’s final presentation on Wednesday. Johnson said she thinks it’s a rarity for two high-ranking local officials to be present for a presentation.

The final presentation is like a blind competition. Aside from running into another city’s group in a Boston hotel lobby, Johnson never saw another representative or glanced at another presentation. At the end of the day, it didn’t make a difference.

A little less than six years out from tip-off at the 2024 Final Four, the host committee will begin to get going on the post-bid execution right away. The group will meet in August to put together a timeline. From there, Johnson said, staffing for the event will likely come around 2022 while they keep in constant communication for the NCAA.

Johnson wasn’t keen about harping on Phoenix’s past mega-event history. She doesn’t see the awarding of the ‘24 Final Four as validation that they made it. Instead, it’s just another opportunity to show off what they can do.

“There’s always new stadiums that are being built, as we see, and anytime there’s new stadiums being built, there’s opportunities for it to go to them, ” she said. “I think we have to put our game face on and, again, put together the best experience we can for the NCAA and hopefully we’ll show them what we can do.”

“The presentation on Wednesday went as well as it could go,” Johnson said. “We walked out of the room saying, “OK, we did everything we could do and now it’s in the hands of the NCAA.”

“It went really well,” Johnson said of the 2017 event. “We know we did a great job hosting. We had engagement and community participation and that’s a great thing.”