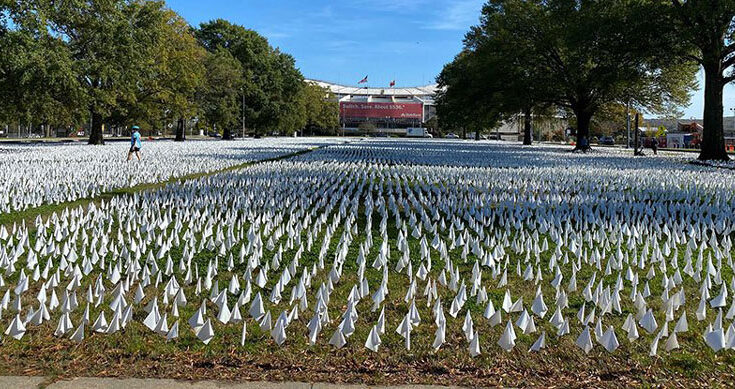 With an American death toll soon to reach 1 million from COVID-19, Crede Bailey is a whole other statistic.

It didn’t kill him. It only took his leg and ruined his lungs.

I wouldn’t know of Bailey’s suffering had I not read about his boss’s staggering negligence in Jonathan Karl’s “Betrayal.”

Bailey was the director of Donald Trump’s security office. As such he was one of many victims of what Karl calls “almost total disregard for COVID protocols” in the early stages of the pandemic.

Bailey was hospitalized for three months, ultimately suffering permanent damage to his lungs and amputation of the lower part of his right leg.

This from an illness that Trump said at a campaign rally “affects virtually no one at all.”

Karl’s book has drawn most of its attention for describing the events of Jan. 6 and Trump’s efforts to nullify his rejection by voters.

However, its depiction of how the Trump White House behaved during the pandemic is every bit as scandalous.

People continue to die from the pandemic Trump so brazenly dismissed.

No employer would have been allowed to endanger his employees as Trump did – and by extension, the people he swore to defend and protect.

Chris Christie spent a week in intensive care battling the disease after attending a super-spreader event at the White House staged for TV and the introduction of Justice Amy Coney Barrett.

He had dodged a bullet earlier when, in helping prep Trump for a debate, he was in close contact with Trump aide Hope Hicks, who was infected.

Unlike any responsible entity in the midst of a deadly pandemic, the White House didn’t inform Christie or others that they might be infected. He found that out from a CNN reporter who told him of Hicks’ illness and asked how he was.

There was the deadly cover-up about Trump’s blowing off COVID testing as he prepared to join Joe Biden on a stage in Cleveland.

When Trump got the virus and was himself in ICU, it became a lie-filled TV extravaganza, with white-coated props sent out to dismiss what later was shown to have been a very serious situation.

Did we say extravaganza? That certainly was the case when Trump returned to the White House for a diva moment on the balcony. It could have been even more outrageous. Aides told Karl that Trump had talked to them about wearing a Superman shirt under his suit and ripping off his dress shirt to reveal his “S.”

It was all a joke to the man, or at least he wanted to downplay the threat at every turn.

Last week, documents from the Centers for Disease Control revealed how the White House shot down recommendations that churches begin hosting services remotely or with drive-through services rather than spread the virus through singing, hugging, and prayer.

Interestingly, the White House lawyer who prepared the memo, found a reason for a yuck: “I will say that if I was old and vulnerable (I do feel old and vulnerable), drive-through services would sound welcome.”

And now we have a million dead Americans – many of whom are dead because the leader they venerated executed his official duties so callously. Tragically, many of his followers comported themselves the very same way.

The disease Trump said would cause so little suffering – no worse than the flu – over the last two years was the third leading cause of death behind heart disease and cancer.

Another staggering number: an estimated 200,000 American children have lost one or both parents to the disease.

Now vaccines stunt its devastation. But before vaccines, an ounce of prevention would have saved lives, and at least one man’s lungs and limb.