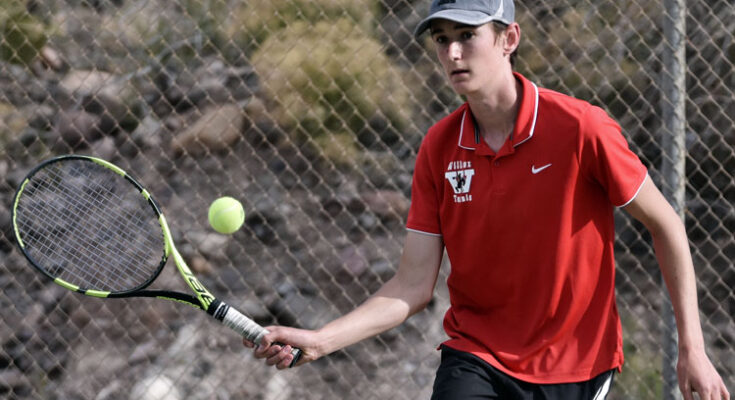 Raymundo Frasquillo File Photo/Gila Herald: Jacob Kauffman returns the ball during a recent match. The Willcox sophomore No. 4 seed ended as the state runner-up, going 4-1 and adding to a 15-0 regular seeding mark.

GLENDALE – Three of 13 Division III – Section I student-athletes reached the semifinals and one was within the grasp of an individual state title. The matches were held on the Glendale Paseo Racquet Center courts on May 2.

The No. 2 seeded Arizona College Prep sophomore Andrew Young defeated No. 4 Willcox sophomore Jacob Kauffman 6-2 and 7-6 for the title on May 2.

Thatcher sophomore Gene Huish defeated Gilbert Christian junior Nolan Engel (6-2 twice) in the first round and fell 7-10 (6-2, 3-6) in a tie-breaker to No. 6 Tucson’s The Gregory School junior Luke Weather during the second round.

Willcox senior Ryan McClaine fell 6-7 and 4-6 to Luke Weather in the first round.

The No. 2 Scottsdale Prep junior Surya Surandran –  sophomore  Connor Swenson duo defeated the No. 1 Phoenix Country Day School senior Tyler Tam – Jacques Serrain duo 10-4 (1-6, 6-4) in a tie-breaker for the title on May 2.

The semifinals (May 6) and final (May 7) are at the Glendale Paseo Racquet Center, 6268 West Thunderbird Road.

The No. 2 Chandler Prep junior Gaby Chu – sophomore Sonali Bhalia duo defeated the No. 1 Phoenix Country Day School senior Daniela Castro-Martinez and junior Julia Black duo 7-5 and 6-4 for the title on May 2.