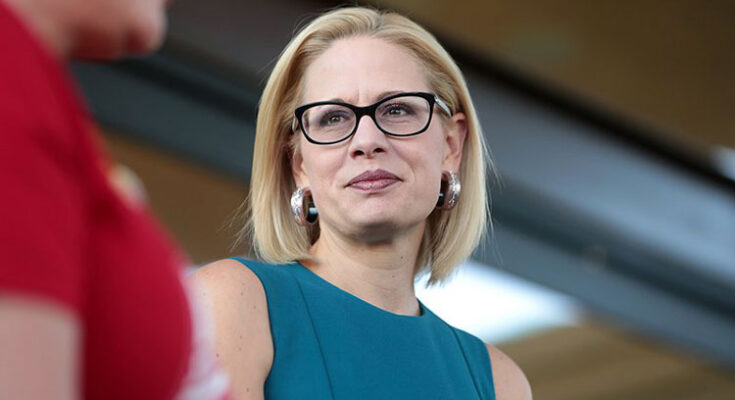 It’s not even Christmas, and already the 2024 political sales pitches have begun.

Arizona U.S. Senator Kyrsten Sinema’s sudden decision to switch from Democrat to Independent Party affiliation because of her alleged disappointment with constant Democratic and Republican bickering seems more of a publicity maneuver than actual personal differences.

With Arizona a borderline Purple state, Kyrsten’s testing the winds to see which way she thinks they may blow in 2024.  Professing to be a newly converted Independent, her loyalty can sort of wander somewhere in the middle – neither Democrat nor Republican.

Rather, both – depending upon the situation.

“There you go again, Mike.  Flapping your gums about something you don’t really know anything about.  Besides, what gives you the right to shoot off your big mouth?” Gila Herald readers are probably wondering in exasperation.

The old saying “Don’t judge a book by its cover” could be an appropriate expression in Krysten’s case.

Just because she’s become disenchanted with Dem’s and Repub’s way of doing things, and seeking neutral ground as an expression of her objections, does not necessarily indicate she has completely abandoned her previous party allegiance.

For instance, she’ll still maintain her Democratic committee assignments and huddle (caucus) with them in controlling the Senate.

Her voting record as a Democrat has nearly been in lockstep with the party’s interests.  While voicing objections to President Joe’s inflationary “Build Back Better” scheme, she still voted for it.

Other important issues – abortion, raising taxes, gun control, death penalty – Kyrsten’s been there for the Dems.

A September 2022 Arizona-AARP Poll indicates she’s not overly popular in the Grand Canyon State – with practically anyone.  She lags by double-digits in every category.

With this in mind, and probably realizing a 180-degree flip to the Republican side of the Congressional aisle would be too much, too soon, it appears she’s cautiously chosen the middle in hopes of appeasing both parties.

Not certain her theatrics will be entirely successful in 2024.  Changing party affiliation is not a new political trick.  It’s been tried several times with varying degrees of success.

In Krysten’s particular situation, a lot depends upon who the Republican presidential candidate is, and how the Biden Administration manages its affairs over the next two years.  If the economy continues to weaken, inflation remains to dominate, and the US/Mexico border is still in complete disarray, she may actually pull it off and remain in office by acting like an independent moderate.

Which simply means she’ll still be a Democrat, only under a different name.

Of course, Arizona Democrats will choose a new Senate contender, Republicans will do the same, and a few Independents will probably join the 2024 primary election fracas.

If Kyrsten is going to politically survive all this, and emerge victorious in the general election as an incumbent Independent, she’s going to have to have a lot of money and even more voting friends.

It’s a steep hill to climb.  I’m not convinced Vegas odds will favor her.