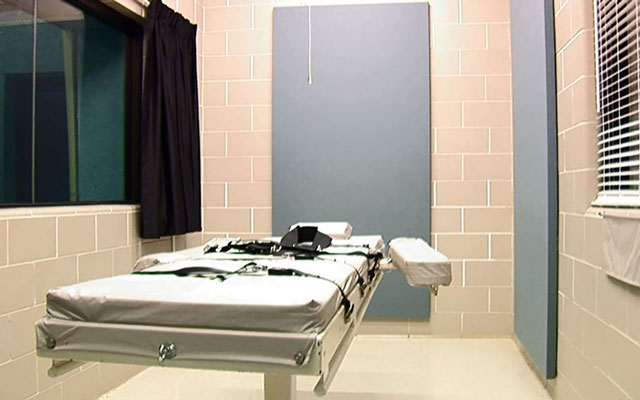 Photo Courtesy Arizona Department of Corrections, Rehabilitation and Reentry: After going eight years without an execution, Arizona put three men to death by lethal injection in 2022, and state officials are seeking a death warrant on a fourth. Prosecutors say the sentences are long overdue for crimes committed, in some cases, decades ago, but critics say it’s too soon for a state that has had severe problems with its death penalty protocols.

WASHINGTON – After an eight-year hiatus, Arizona executed three death row inmates in 2022, the most death sentences carried out in the state in a decade.

And Attorney General Mark Brnovich has set the wheels in motion for a fourth execution, which could come after he leaves office next month.

Brnovich on Wednesday asked the Arizona Supreme Court to issue a death warrant for Aaron Brian Gunches, a convicted murderer who has waived all his appeals and who petitioned the court last month for a death warrant “so that justice may be lawfully served and give closure to the victim’s family.”

The attorney general’s office agreed that Gunches met the requirements for a warrant of execution, which would be the fourth issued this year. In a statement from his office, Brnovich said, “We must never cease to pursue justice for victims, their families, and our communities.”

The executions are partial fulfillment of a pledge Brnovich made in 2019 when he settled a lawsuit with death penalty opponents over the state’s execution protocols. He said then that it was “time to resume executions in Arizona, where 14 death row inmates have exhausted all automatic avenues to appeal their sentences.”

It would be another three years before the state put convicted murderer Clarence Dixon to death on May 11, 2022, the first since the botched execution of Joseph Wood in 2014 brought capital punishment to a halt in Arizona. Less than a month after Dixon’s execution, Frank Atwood was executed by lethal injection and on Nov. 16 Murray Hooper was executed. Both Atwood and Hooper were convicted of murder and other charges.

Brnovich said in a 2020 letter that the “rights of victims are assaulted each time an execution is delayed.” But death penalty opponents said Arizona’s push to resume executions has come much too soon.

“The fact that Arizona has started executions again and has continued to have problems with execution is something that, as the state looks forward, they are going to have to reckon with,” said Ngozi Nduele, deputy director of the Death Penalty Information Center.

The state halted executions in 2014 after the badly botched execution by lethal injection of Wood left him gasping and snorting on the death chamber gurney for almost two hours, according to witnesses. Wood’s executioners injected him 15 times with midazolam and hydromorphone, a “lethal cocktail” that had caused drawn-out executions in Ohio and Oklahoma.

“It was kind of visibly apparent something had gone very wrong,” Nduele said of Wood’s death.

In the four years before Wood’s execution, the state had executed 14 inmates – six in 2012 alone. But capital punishment stopped after Wood, as the state battled legal challenges over its execution procedures and struggled to find alternative drugs to carry out the death sentence.

A state review claimed that prison officials followed proper procedures in the execution of Wood, who the report said did not suffer as much as it appeared. In 2020, the state secured a source of pentobarbital, a lethal injection drug, and in 2021 it refurbished the state’s gas chamber, last used in 1999, as an alternative to lethal injection.

That set the stage for the return to carrying out the death sentence this year.

Critics say it puts Arizona at odds with other states, particularly states that have experienced problems with their executions as Arizona did.

“Despite the fact that 23 states have the death penalty, there are very few states that are actually executing people,” Nduele said. She said there have been fewer than 30 executions across the country since 2014.

A slight majority of Americans, 55%, were in favor of the death penalty for convicted murderers, according to a Nov. 14 Gallup poll. But that was down sharply from the 80% who said they supported capital punishment for murderers in 1994.

“If we look at … the history of the United States and the history, frankly, of the developed world, the death penalty becomes less and less common over time,” said Joshua Spears, an attorney with the American Civil Liberties Union of Arizona. “It comes to be viewed as an antiquated, barbaric practice.”

When he started his push to resume executions, Brnovich noted that 14 death-row inmates had exhausted their automatic legal appeals. That number has since grown to 21 of the 110 prisoners currently on Arizona’s death row. But Spears said that just because “these people have been through appeals … that should not give us necessarily confidence that their sentence or their conviction is correct.”

“The problem historically in Arizona has been … providing qualified, well-compensated attorneys to people who are accused of capital crimes” and who face a long and complex appeals process in Arizona, Spears said.

Spears, who previously worked at the Federal Public Defender’s Capital Habeas Unit, said the process “does not necessarily provide the people on death row the opportunities they need to challenge their conviction and sentencing.”

“The people who are sentenced to death are poor people, and often people of color or ethnic minorities, and that is a common link throughout the United States, not just in Arizona,” Hamm said.

“Clearly, if you have the money to hire an attorney, privately retained counsel, generally speaking, there will be a much higher chance that some sort of a plea will be negotiated that will avoid the death penalty,” she said.

While Brnovich continues to press for executions as he heads out the door, it is not clear what his successor will do. The law requires that executions be carried out 35 days after a death warrant is issued, but Brnovich is currently scheduled to leave office on Jan. 5.

Capital punishment was not a focus in the race for attorney general between Democrat Kris Mayes and Republican Abe Hamadeh, and requests for comment for this story were not returned by either campaign. The race between the two is headed to an automatic recount after Mayes finished the race with a lead of just 511 votes out of more than 2.5 million ballots cast.

Hamm said that “no matter what their political beliefs or leanings,” the attorney general can’t get around the fact that “we have the death penalty in Arizona.”

Brnovich is not conflicted.

“I made a promise to Arizona voters that people who commit the ultimate crime get the ultimate punishment,” Brnovich said when the Arizona Supreme Court issued Dixon’s execution warrant. “I will continue to fight every day for justice for victims, their families, and our communities.”

But Spears said there are still “serious issues with the death penalty.”

“We know there are disproportionate impacts on people of color, we know that there is questionable deterrence value,” he said.

“A fundamental question you have to ask at the outset about (the) death penalty is … what is the purpose?” Spears asked. “What is the benefit of the death penalty? Like, why are we doing this at all?”